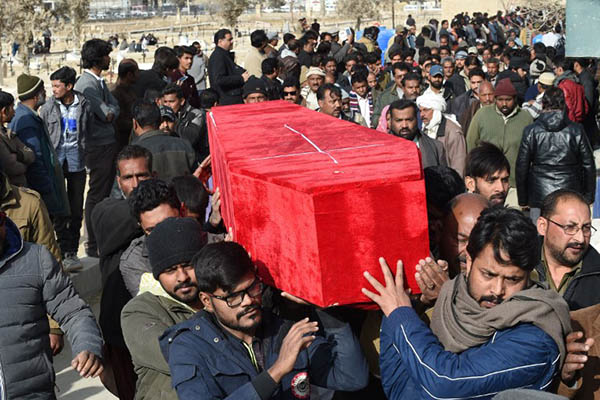 Christians were targeted in a growing number of killings and other attacks around the world last year, especially in Nigeria, Pakistan and southeast Asia, an advocacy group said on Wednesday.

In its annual report on violence against Christians worldwide, the Dutch-based Open Doors NGO said it had been able to confirm 3,066 deaths in the twelve months to Oct. 31, 2017. That was a sharp increase from the 1,207 registered in the previous year, though still far below the 7,106 in the 2015 period, when the Islamic State group was still on the offensive in Syria and Iraq.

For the 17th year in the row, North Korea topped the list for the persecution of Christians, with Open Doors saying its estimated 300,000 Christians faced “certain death” in camps if their faith was found out. “As the regime becomes more and more isolated, it is becoming increasingly paranoid and pitiless toward anyone suspected of treason against its leader,” Kim Jong-Un, it said, adding the near impossibility of entering the reclusive state meant it could not provide hard figures on the number of victims.

Christians also remained particularly vulnerable in Iraq, where a series of military defeats for I.S. has failed to halt “hateful preachings against Christians” in radicalized mosques, according to Open Doors. But Pakistan, where I.S. claimed responsibility last month for a deadly assault on a church in Quetta, was ranked worse in terms of the prevalence of attacks.

Open Doors pointed to the “regular attacks on churches (arson, broken windows, sabotaged power lines), the 700 kidnappings per year, rapes or forced marriages for Christian women and the frequency of riots after rumors of blasphemy.”

In neighboring Afghanistan, ranked second-worst for the persecution of Christians, the report found “the clan” to be “the main persecutor, chasing out or killing Christians to maintain the community’s honor.”

In terms of number of deaths, Nigeria was again the most dangerous for Christians for the fourth year in a row, accounting for some 2,000 deaths, or two-thirds of last year’s total, a three-fold increase on the previous year’s recorded tally of 695 deaths. “Even as the killings by [the Islamic militant group] Boko Haram in the northeast declined, those carried out by [Muslim] Peul nomads are rising in the center of the country,” Open Doors said.

It said the Peul minority was expanding its attacks further south, where most of Nigeria’s Christians are found.

Africa as a whole remained the most violent, with nearly one of every eight of the continent’s 608 million Christians facing “extreme persecution.”

The Central African Republic (500 deaths) and the Democratic Republic of Congo (136 deaths), where skirmishes have intensified between rival militias, were also singled out as particularly dangerous, as were Egypt (128 deaths) and Cameroon (100).

In southeast Asia, the spread of what Open Doors called “religious nationalism,” often with the complicity of the state, had led to increasing violence against Christians in several countries, especially in India and Nepal. The group accused Hindu extremists of “acting with impunity,” in India, where 24,000 attacks against Christians were registered during the period under review, including at least eight deaths at the hands of Hindu nationalists.