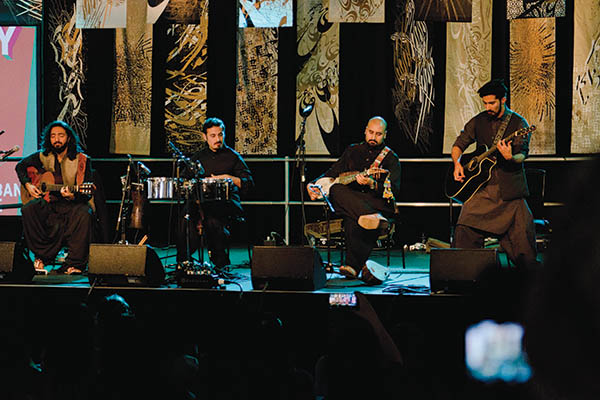 The soaring voice of the grand dame of Sindh, Abida Parveen takes flight and returns to take the audience under her wing as she sings of Sehwan’s red saint. Impassioned cries of Nara-e-Hyderi pierce through the darkness of the Royal Festival Hall and the audience unites in echoes of “Ya Ali.” The auditorium is so packed that rows of seats have been added behind the stage. After what happened in Sehwan Feb. 16—the Islamic State claimed a suicide attack on the Sufi shrine that left at least 90 people dead—the moment is all the more emotionally loaded, poignant and cathartic.

What do festivals like Alchemy achieve I ask Faiza Butt, a Pakistani artist who works out of London and is displaying her installation Paracosm at the Southbank Centre where the 11-day event, probably the largest such South Asian event in the world outside of the subcontinent, recently concluded. Butt, thankfully, never uses the words “soft image of Pakistan” even once. Instead, she is able to gauge that while Alchemy may in one way be taking Pakistan to the world, it is equally about bringing Pakistanis together on a world stage to celebrate their own arts and liberal thought. “At these sorts of events, likeminded people get thrown together in a moment of camaraderie,” she muses. “Take the Abida Parveen concert for example—there was this magnetic, connective energy. It was a human mass that believed in the same thing and that’s very beautiful. This is an audience that is moderate, tolerant and culture-loving.”

Butt’s own work, which held a prominent spot in the main building’s foyer, discusses the relationship between the secular and the sacred. Using the poetry of her own Kashmiri ancestry and also that of Faiz Ahmad Faiz to signify the former, the installation’s cube-like formation and decorative aesthetic also alluded to the architecture of the holy Kaaba. The images on the outside of the cube were from Kashmir, yet Butt emphasizes that it could be “anyone’s homeland.” The inside was covered in photographs of the deep universe taken by the Hubble telescope, which is about our “connection to the universe, the grander scheme.” Through much of the exhibition, Faiza assumed the role of silent observer watching people interact with her art. “Older people were reading the words, younger people were taking selfies with the installation. It’s interesting to see how each generation responded differently.”

About four years ago I, too, was part of a much smaller audience at the Southbank, quite unlike this year’s packed-to-the-rafters festival. Back then there wasn’t much from Pakistan to interact, or take selfies, with. I remember attending Alchemy with a feeling of disappointment, almost resentment, at being tokenized into one or two inconsequential events. In those days the festival was unequivocally Indian though it advertised itself as South Asian. Pakistan was a side act—or to be more accurate a cameo. The murmurings of discontent must have been loud enough because the Southbank arranged an open discussion inviting key actors and groups in the British-Pakistani cultural community to articulate what they felt was missing. The answer was—everything. Since then Alchemy has made a conscious effort to diversify, starting with a day of “everything Pakistan” curated by writer Kamila Shamsie in 2014. 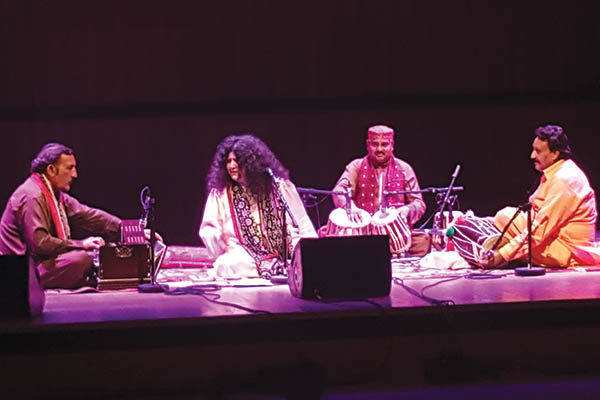 In 2017 the selection has been further refined from a carry-all bursting at the seams to a more thought-provoking spectrum of opinions and artwork. From India there was the monumental Ravi Shankar opera Sukanya, a collaboration between The Royal Opera and the London Philharmonic Orchestra and the Bollywood beats of Vishal and Shekar, the composing duo behind “Balam Pichkari” and “Baby ko Bass Pasand Hae.” But despite these, in terms of both diversity and depth, this was Pakistan’s year. Alongside the age-old kafis of Abida Parveen, there was also substantial input from the younger generation of Pakistani musicians: be it the lingering romanticism of the teen hearthrob Bilal Khan, or the tradition-meets-modernity sounds of protest from Khumariyaan. Presented by Funoon, which celebrates the South Asian cultural scene in London, the boys from Peshawar brought the house down in a free concert that showed Londoners how Pakistanis rock and roll. This was one of the truly crossover events at the festival.

On a less serious note, British-Pakistani funny boys Tez Ilyas and Mawaan Rizwan brought their own brand of Made in Britain comedy to the stage. Unfortunately, the stand-up act was staged simultaneously with Parveen’s performance and I suspect most Pakistanis preferred to attend her concert.

This is also the year the Karachi Literary Festival came to Alchemy in the form of a highly ambitious single day event incorporating multiple sessions and a glittering array of around 60 speakers from left-field novelist Mohammed Hanif to the just right-of-center former leader of the Tory party, Baroness Sayeda Warsi. I moderated one session in which I was given the challenging task of bringing together some of Pakistan’s finest in various fields—Maheen Khan (fashion), Atiqa Odho (film/TV), Faris Kirmani (documentary) and the recently popular Cyril Almeida who it seems is finally off the exit control list and no longer engaged in Viber conversations with Maryam Nawaz. The picturesque backdrop of a London cityscape complete with the London Eye was certainly Instagram friendly.

Conversely the various sessions were a bit difficult to decipher via the meagre information meted out by the program. Even so, Pakistanis are a persevering lot and the event was well-attended, the discussions thoughtful and thought-provoking, and the lively Q&As hinted at people’s need to be heard and desire to know more. A few sessions could have done with fewer panelists and some, like the one on Pakistan’s geopolitical impulses and place in the world, would have been more balanced with louder critical voices to counter the establishment figures, but overall Ameena Sayyid of Oxford University Press and her team pulled it off admirably. Though after such a full program, it should be interesting to see how they differentiate next year’s edition.

In its 8th year, Alchemy was both challenging and fulfilling. And Pakistani culture featured prominently in the headlines. Was it brave and honest enough? Did it speak truth to power and entertain at the same time? Faiza Butt says she was told to explain her work so as to steer clear of controversy. “How can you be a Pakistani feminist and not be controversial?” she asks. “Being an artist I am sensitive. You are encouraged to look between the layers. I can’t close myself off to that exploration.” On the other hand, gender trouble and issues faced by the transgender community were brought to the fore during KLF so the doors were certainly not closed. Where Alchemy holds back is any serious attempt to provide a space where its diverse communities can collaborate to create new art and performance rather than feature in standalone acts with a circumscribed geography. Pakistan was doing its thing while India and Bangladesh were doing their own. But how about a South Asian thing? After all isn’t it an alchemist’s role to combine and transform, to create anew?

With borders between South Asian countries becoming so rigid, perhaps it falls upon festivals like Alchemy to serve as a forum where we can speak openly to each other and, even more essentially, find a common voice.