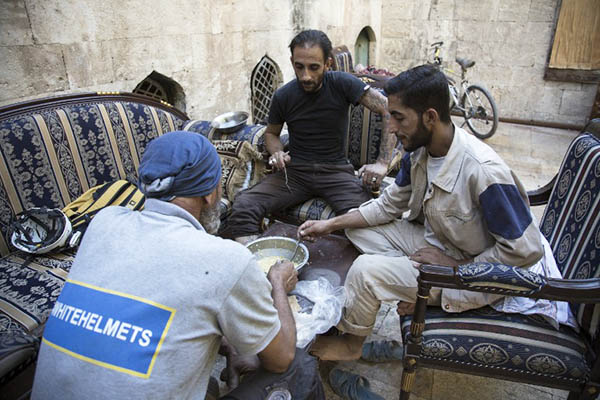 Syria’s White Helmets reveal the brutal nature of the ongoing conflict in their own words.

As bombs rained down on Aleppo, White Helmets volunteer Abu Hassan rushed to join the search for survivors, as usual, never imagining he would find his son’s body among the dead. The two of them had worked side-by-side in scores of harrowing rescue operations in rebel-held districts of Syria’s battleground second city over the past three years.

But Abu Hassan said that rescue mission was one he will never forget.

“About two weeks ago, I heard SOS calls on the walkie-talkie about heavy casualties in Salhin,” the 50-year-old former carpenter told AFP. He said he knew his son Hassan had been heading to the eastern neighborhood to refuel a White Helmets ambulance.

“When I got there, I saw bodies lying on the floor. One of the volunteers told me there were more behind the building that was hit. That’s when I started to feel afraid. I found the body of a young man lying face down, with severe wounds to his stomach, leg and head. I turned him around to see his face. It was my son.”

Abu Hassan said he spent the rest of the night sitting next to his son’s body on the floor of the White Helmets branch where they both worked. At dawn, he buried Hassan himself.

“It was the hardest moment of my life,” he said, struggling to hold back tears. “I asked the branch chief to move us to a different building, because I couldn’t stay in the same place and see his name and the words he wrote on the wall. I can’t stand remembering that night.”

The 26-year-old left behind a wife and two children of his own.

Abu Hassan pointed to a photograph of him—a sandy-haired, grinning young man—on the memorial wall of the now-disused branch headquarters in the Bab al-Nayrab district of the city. Three other volunteers from the branch who lost their lives are commemorated alongside him. Their signature hardhats have not been reused but instead preserved as a tribute.

Across Syria, more than 140 of the White Helmets’ nearly 3,000 volunteers have died in the line of duty. Their mission is to save the lives of others but sometimes they need to be rescued themselves.

Mohammed Wawi described one operation last week, when bombing began as he was searching for survivors of an earlier airstrike. “The fire and rescue team was hit and six members of our branch were wounded, one of them seriously,” Wawi said. “We had been trying to save people, but then the residents saved us.”

Wawi was smearing mud on the branch’s fire truck in an attempt to camouflage it, protecting it from the view of warplanes overhead. Since government forces launched an offensive to recapture east Aleppo last month, the rebel-held sector has been subjected to devastating air strikes.

Whole streets have been leveled and the White Helmets’ own infrastructure has taken a heavy hit. “Our branches have been directly targeted in airstrikes,” said Bab al-Nayrab branch chief Bibars Mashaal.

In the past two weeks alone, three branches have been put out of action and a third of the White Helmets’ ambulances, fire-trucks and bulldozers in the city destroyed, Mashaal said.

Often, the damage to rescue workers is more than skin-deep.

Louay Mashhadi, 25, who heads another White Helmets branch in Aleppo, recalled one rescue operation earlier this month that left him so traumatized he stayed home for three days afterwards. “I pulled an infant, four or five months old, out of the rubble,” said Mashhadi, whose own son is around the same age. “He had lost his legs and part of his stomach but he was still alive. There was no one around from his family, so the baby stayed in my arms for about 15 minutes. He died when the ambulance came.”

Mashhadi said the volunteers relied on each other for the strength to continue their work. “Because we’re on call all night together in the same centers, we’re more than just colleagues or friends.”

But that makes it all the more painful when fellow members are killed. Four of Mashhadi’s team have lost their lives in the past two months alone. “I cried for them all, because they are members of my family.”