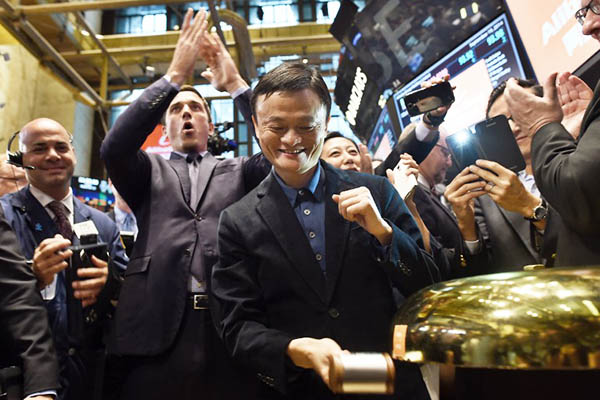 Jack Ma, founder of e-commerce giant Alibaba, is China’s richest person with a fortune of nearly $20 billion, as billionaires increase despite a slowdown in the country’s economy, Forbes magazine said Tuesday.

The number of Chinese billionaires surged to 242 this year from 168 in 2013, Forbes said in its annual “China Rich List,” which ranks the wealthy.

Ma’s personal wealth ballooned to $19.5 billion from $7.1 billion last year after his company’s record breaking initial public offering (IPO) on the New York Stock Exchange in September, according to the magazine. The entrepreneur also topped a similar list released last month by China-based luxury magazine publisher Hurun, which put his wealth at a much higher estimate of $25 billion.

Alibaba was founded 15 years ago with $60,000 pooled together from Ma’s friends, and is now valued at more than $240 billion after listing in the United States. Ma, a former English teacher turned Internet visionary, reaped more than $800 million from selling shares through the IPO, according to company filings.

Wang Jianlin, whose private conglomerate Wanda bought U.S. cinema chain AMC, was knocked out of first place and slipped to fourth this year, the Forbes list showed. A “challenging” year for the domestic real estate sector, the main source of Wang’s wealth, has seen his fortune shrink to $13.2 billion from $14.1 billion last year, it said.

China’s economy expanded 7.3 percent in the third quarter, its slowest pace in more than five years, in part because of government moves to rein in real estate prices. The technology sector fared better than traditional industries amid China’s economic slowdown, commanding the top three spots and taking up half of the top 10, according to Forbes.

“Entrepreneurship is still thriving in China,” said Russell Flannery, Shanghai bureau chief for Forbes and compiler of the list. “The different set of industries and individuals [on the list] suggest there’s still plenty of change in the economy,” he said.