Home Lightbox All about Imran 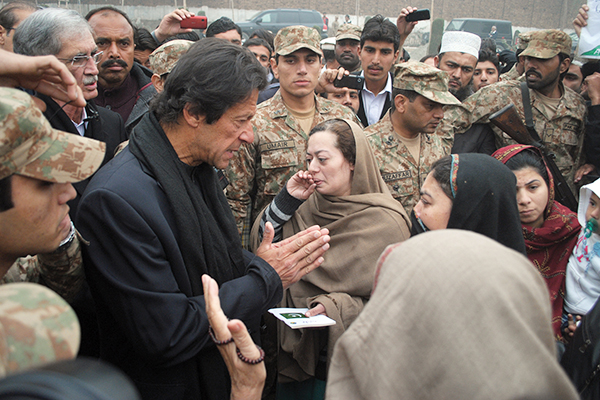 Imran Khan called off his street campaign against Prime Minister Sharif after the Peshawar school attack. The two even made a joint appearance the following day, on Dec. 17, to signal national unity. But despite the tragedy, Khan’s PTI is continuing to spend its, and the government’s, time on its longstanding political demands. He didn’t receive a hero’s welcome at the Army Public School on Dec. 22. It was asked: The PTI has been agitating in the streets against Sharif, but what has the PTI-led government actually done for Khyber-Pakhtunkhwa province? That’s being polite considering that on Aug. 28, the National Counter Terrorism Authority had warned Khan’s government, police and the Frontier Corps about imminent “terrorist activities against Army Public School/colleges and other education institutes being run by Pakistan Army … Forwarded for extreme vigilance and heightened security.” The inaction left 150 dead on Dec. 16, and exposed the PTI’s big talk as criminally hollow. For once, it really is all about Khan, who needs to recognize just how badly his party has failed the people.

This piece is bull crap and clearly biased. you know very well that school was within cant and who manages the security there. His agitation on rigging is ridiculous but don’t charge him of negligence for this incident!

Indeed authorities must be held answerable but one must understand the fact that suicide operations are mostly successful. They can hardly be avoided even in the tight security. Yesterday today and even tomarrow only imran khan’s solution is appropriate. This war can only be won with segregation among good ppl of wazeeristan and extremist taliban. The solution must be long term if we want a long term security plan. We must admit that pti is compelled in the current circumstances to take back step from imran khan’ stance about this war. Pti is doing good but that can be only seen if we look at things unbiasly.

How can u blame just IK’s government for the tragic incident of Peshawar when the security of contonment board doesn’t comes under his jurisdiction ??? … Who will answer about the Fc that his deployed in Islamabad rather than kpk? Its time that we should collectively accept the responsibility and are not indulged in blame games… such biased articles are not going to help Pakistan…..

I am an ex student of APSC 1993-2000. And let me confirm for all those who posted above me that this school is NOT IN CANTONMENT AREA. It is on Warsak Road and Next to Shami Road. Please spare us your political excuses. Other than that Even if it something horrible had gone down in cantonment area will the terrorist not pass through Civil areas. what kind of lame excuse is that.

PS Reminder again APSC is NOT IN CANTONMENT AREA

Warning were out there in weeks before Peshawar attack and repeatedly ignored by politicians including Imran Khan and not for the first time… It was clear that as long as enforced disappearances, torture in custody, and extra- judicial killings continued that the families of those in institutions deemed by militant groups as being connected to such activities were going to be targeted. Warnings said so… The same as warnings were ignored for 3 weeks prior to killing of 23 FC men. Problem is no one wants to address state activities outside the law… only actions of insurgents, so nothing ever changes. Now government concentrates on mass hangings instead of dealing with key issues that led up to terrible Peshawar attack and the cycle of violence continues!

4 months is not the same as three weeks. Please get your maths right.

A clearly biased piece of reporting, it doesn’t even merit to be called journalism.

If not the head of ruling party then who should be held responsible.

Is this piece even real or was it posted by mistake ?
Your job is to report and not post your personal opinions about PTI & IK

The bias of Newsweek against PTI puts it in the yellow journalism category ! The editor should know that the security of all Cantonements, and everything within them ,are the responsibility of the Military Police and Army ! So how can the civilian govt. ,Aka PTI, be held responsible ?

I totally agree with the writer, instead of making the same speech over and over again for 126 days, he could’ve done something that would’ve made a difference! It’s sad the most of our “EDUCATED” middle class is obsessed with Imran Khan and will go to any length to absolve him of this criminal negligence

I find no reason to disagree with you. Having said that we look at the course of the events that led him to these 126 days and what were the basis of his 126 days long protest. He was shapping his protest with every passing day. It was not possible for him to back off and even it is against his nature. I was sure from the day one that these corrupt politicians wud not let him achieve his goal. And 126 days proved how all forces who were benefitting from the current system got united against him. He too makes mistake and it is indeed a mistake on his part that he couldn’t perform in the province but still i believe their performance is much better comparitivly.

Is this news at all? Or an opinion? You know they say,”Opinions are like …… “