All Eyes on Syria as Ceasefire Deadline Looms 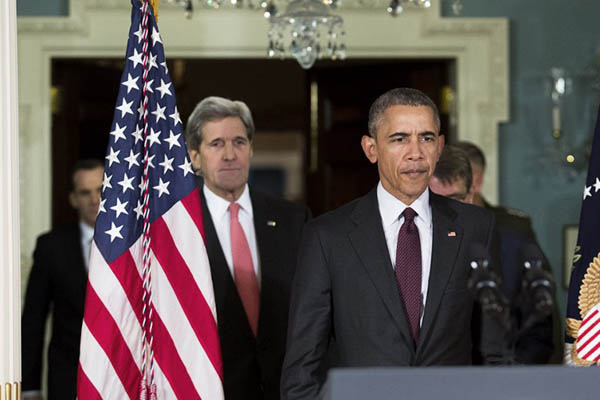 U.S. President Barack Obama warned Russia and Damascus that the “world will be watching,” hours before a partial truce was due to come into force in war-torn Syria on Saturday.

Obama said “the coming days will be critical” for the ceasefire brokered by Moscow and Washington, and agreed to by both President Bashar al-Assad’s regime and Syria’s top opposition grouping. The deal—which excludes the Islamic State jihadist group and other extremists—marks the biggest diplomatic push yet to help end Syria’s violence, but it has been plagued by doubts after the failure of previous peace efforts.

Members of the 17-nation group backing Syria’s peace process are to meet in Geneva on Friday to work out further details of the agreement. It is then expected to be endorsed by the U.N. Security Council, also on Friday, diplomats said.

There are hopes a successful ceasefire will lead to the resumption of peace talks that collapsed in Geneva earlier this month.

“Tomorrow is going to be a very important, I will say a crucial day,” the U.N.’s Syria envoy Staffan de Mistura told reporters at the U.N.’s European headquarters in Geneva. The agreement allows military action to continue against I.S., which seized control of large parts of Syria and Iraq in 2014, as well as against the Al Qaeda affiliated Al-Nusra Front and other jihadist groups.

Obama said he was “certain” those groups would continue to fight, but stressed that the U.S.-led coalition was winning the war against I.S., citing territorial gains. The U.S. president said he was not “under any illusions” about possible pitfalls, but said the ceasefire could be a “potential step in bringing about an end to the chaos.”

“A lot of that is going to depend on whether the Syrian regime, Russia, and their allies live up to their commitments,” Obama said.

Russian President Vladimir Putin has promised to do “whatever is necessary” to ensure the ceasefire is implemented.

Russia and the United States are on opposing sides of the conflict, with Moscow backing Assad and Washington supporting the opposition, but the two powers have been making a concerted push for the ceasefire to be respected. Obama reiterated his view Thursday that Assad should step down if a lasting peace is to be found.

Iran is also a supporter of Damascus, and U.S. Secretary of State John Kerry said Thursday that Tehran had withdrawn a “significant number” of its elite Revolutionary Guards troops from Syria.

Turkey has shelled Kurdish forces in northern Syria, saying the army was responding to incoming fire. Ankara regards the main Kurdish militia in Syria, the People’s Protection Units, as an offshoot of the outlawed Kurdistan Workers’ Party, which has waged a decades-long insurgency against the Turkish state.

A Protection Unit spokesman said Thursday that Kurdish forces would respect the ceasefire but fight back if attacked.

The United Nations has managed to boost aid ahead of the ceasefire deadline and expressed optimism on Thursday of more deliveries. Jan Egeland, a special advisor to De Mistura, said that more than 180 trucks filled with aid had reached six areas under siege from different sides in the past two weeks. They have brought assistance to just under a quarter of the 480,000 people estimated to be living in 17 besieged places across Syria.

Egeland said permission had been requested to bring aid to besieged parts of Aleppo, Homs and Eastern Ghouta, all hotspots in the country’s conflict. “We have high hopes that we will be able to get through to these places,” he said.