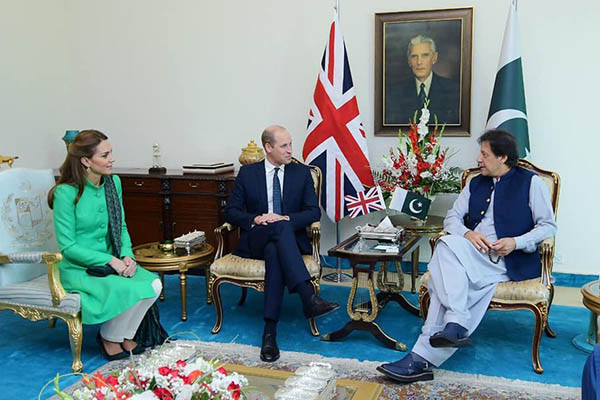 The cricketer-turned-politician was a friend of William’s late mother, Princess Diana

Prime Minister Imran Khan gave a warm welcome in Islamabad on Tuesday to Britain’s Prince William, the son of his late friend Princess Diana, who is on his first official trip to the country with his wife Kate.

The Duke and Duchess of Cambridge were greeted with handshakes by a smiling Khan, who first met William when the prince was a young boy, on the steps at the Prime Minister’s House in the capital.

Pakistani media simultaneously aired archive images of Diana with Khan—then a World Cup-winning cricketer who had just launched his political career—during her own visits to Pakistan more than 20 years ago.

Kate wore a traditional Pakistani dress in vibrant green and white with a dark green dupatta—a change from earlier in the day, when she wore a royal blue shalwar kameez. But the Duke opted for Western attire again—a dark suit and tie.

The couple were due to lunch with Khan before he heads to Saudi Arabia later Tuesday, where he is expected to continue his mission to help defuse tensions in the Gulf by facilitating talks between Riyadh and Tehran.

It came after a busy morning for Kate and William, the first British royals to come to Pakistan since William’s father Charles visited with his wife Camilla in 2006. The couple launched their five-day tour of the South Asian country by signaling their support for women’s education with a visit to a girls’ school in Islamabad.

They dropped in on a mathematics class, where televised images showed them sitting with some of the young students, whose blue uniforms matched the Duchess’s dress. A video tweeted by a British reporter accompanying the couple showed William smiling as he was told the girls were “big fans” of his mother, who died in a car crash in 1997.

“That’s very sweet of you,” he could be heard saying in the video. “I was a big fan of my mother too.”

Education official Khadija Bakhtiar told AFP that the couple helped some of the students solve problems.

William and Kate spent roughly half an hour at the government-run school before they were waved off by smiling students. They were whisked away under heavy security to visit the Margallas, the Himalayan foothills that nestle Islamabad, where they could be seen walking with conservationists in the sun.

William and Kate also met President Arif Alvi, and later Tuesday they are expected to attend a reception in their honor.

Security is extremely tight for the five-day visit, during which the couple is set to visit Lahore as well as the mountainous north and the region near the border with Afghanistan in the west.

Meeting young people and promoting education is one of their priorities for the trip, Kensington Palace has said. Nearly half of Pakistani school-age children—23 million—do not attend school, UNICEF says.

Girls are particularly sidelined from education in a country where women have struggled for basic rights for decades.

For many in Pakistan, nostalgia for Diana has lain heavy over the trip. She first charmed Pakistanis with an official visit in 1991, and is remembered fondly for her efforts on later private visits to help Khan raise money for a charity cancer hospital. It is not clear if the Duke and Duchess will see Khan again after Tuesday.