Home Latest News ‘All Terrorists Should be Eliminated’

‘All Terrorists Should be Eliminated’ 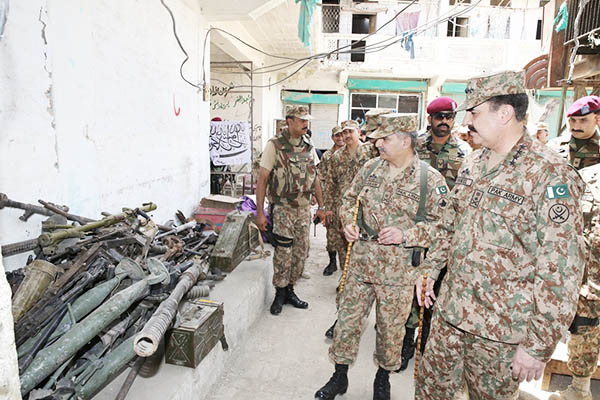 Army chief Gen. Raheel Sharif praises troops on frontlines in North Waziristan for their efforts in ridding Pakistan of militancy.

All local and foreign terrorists, and their sanctuaries, should be eliminated, said Chief of Army Staff Gen. Raheel Sharif on Monday, during a visit to troops on the frontlines in North Waziristan.

In a press release issued after the visit, ISPR stated: “Talking to valiant in the middle of operation in Miranshah, he lauded them for their courage, dedication and high state of morale.” According to ISPR, Sharif also expressed satisfaction over the progress of Operation Zarb-e-Azb and praised the chain of command for their efforts.

Sharif told the troops that terrorists in Pakistan would be hunted down across the country until they had been eliminated. He also appreciated the public’s support for the operation, and promised the nation that Pakistan would be rid of the “scourge of terrorism.”

The Army chief also thanked the internally displaced persons of the region for sacrifices rendered to restore the writ of the state. “He reaffirmed that the Army will not abandon tribal brethren in their hour of need and all possible assistance will be rendered,” according to the ISPR. He also assured the IDPs that the Army would play its role in rebuilding and restoring normalcy to North Waziristan.

The Pakistan Army launched Operation Zarb-e-Azb on June 15 to eradicate militants from the North Waziristan tribal area after the Pakistani Taliban staged an attack on Karachi’s international airport, killing over 30 people. According to the military, nearly 400 militants have been killed and dozens of terrorist hideouts destroyed in the ongoing operation.

request to ispr,please embed a reliable and patriotic reporter of one of the local channels for all to see the true picture.the nation is at war,this will definitely raise the moral of the people and many would like to do more for the idps as eid is approaching.