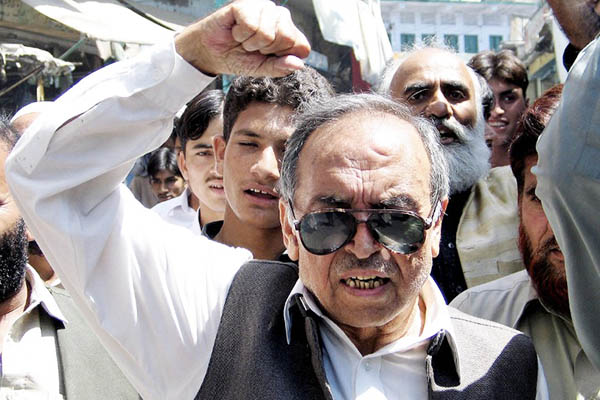 Will the separatist leader’s death pave the way for an independent Kashmir?

Kashmiri leader Amanullah Khan died in Rawalpindi on April 26. His funeral was modest in Pakistan but across the Line of Control in Srinagar, his followers staged a more impressive rally. Khan’s personality today encompasses the complexity of the Kashmir problem and the difficulties in the way of an Indo-Pakistan settlement over Kashmir.

It is symbolic that Khan was born in Astor in Gilgit-Baltistan (once a part of the state of Jammu and Kashmir) in 1934, but went across to Kupwara in the Valley for early education. After passing his matriculation in Srinagar he entered college but was soon distracted by the Independence movement. In time, his party, the Jammu and Kashmir Liberation Front, stood midway between the opposed positions of India and Pakistan: he went against the U.N. Security Council resolution about a plebiscite that contained no “third option.” The JKLF stood for this third option, Kashmir as an independent state.

Pakistan first supported JKLF but soon grasped the implications of doing so. Even after Islamabad decided to embrace the “third option” (i.e. Kashmir’s independence if Kashmiris want it), it was never clear about how much territory it would cede to it. And Khan signalized loss of its strategic Northern Areas to the solution he proposed. JKLF’s armed struggle against Indian atrocities was therefore first ignored in favor of Hizb-ul-Mujahideen, and finally Lashkar-e-Taiba that introduced hard Islam into the Valley and escalated the Indo-Pakistan proxy war.

Khan went into obscurity after running afoul of Islamabad’s Kashmir policy. He had a law degree from a college in Karachi and was always persuasive in argument. He set up a branch of the JKLF in Birmingham, U.K., and could always rely on the support of the Indian and Pakistani Kashmiris settled there. He wanted both sides of Kashmir united under U.N. administration for 15 years before holding a referendum there about which country the people would like to join. Needless to say, India and Pakistan didn’t agree.

Now that he is gone, his legacy of moderation and “middle path” may appeal to people of Pakistan and India. The more sensible solution today as propounded by moderate leaders of India and Pakistan would be to make both sides of Kashmir “autonomous” before normalizing Indo-Pakistan relations through free trade and easy movement of people across the border.