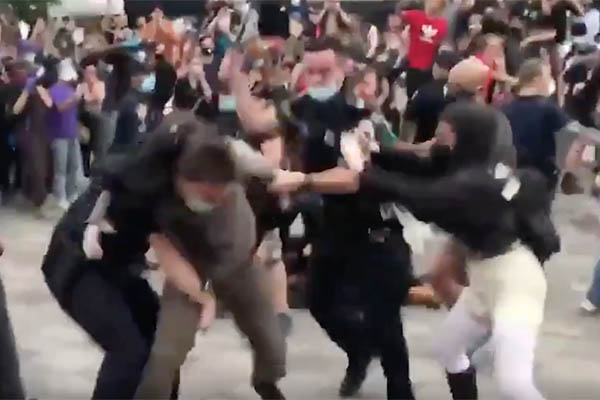 The U.S. on Saturday headed into its fifth straight night of protests over the death of George Floyd in police custody, with cities across the country enacting curfews in a bid to deal with vandalism and looting.

The death of Floyd—a black man who suffocated after a white officer knelt on his throat—happened in Minneapolis, but it has served as a flashpoint for protesters across the country. The National Alliance Against Racist and Political Repression (NAARPR), starting at 3 p.m., declared Saturday a National Day of Protest.

The NAARPR protest had initially been planned in response to the deaths of Ahmaud Arbery, a jogger allegedly killed by Gregory McMichael, 64, and Travis McMichael, 34, and Louisville, Kentucky EMT Breonna Taylor. The latter was killed when police, acting on a “no-knock” warrant invaded her apartment, with it later emerging the suspect police were looking for had already been arrested at the time of the raid. However, with the death of Floyd, the Day of Protest became a rallying cry for those frustrated by the systemic violence perpetrated on black Americans by police forces.

Many cities have ordered curfews in a bid to stop the unrest. Louisville, the home of Taylor, has instituted a dusk-to-dawn curfew. In addition, Kentucky Governor Andy Beshear announced he was sending the National Guard to Louisville.

“What we have seen, especially last night, and what our intelligence says is going to happen tonight are outside groups moving in, trying to create violence to harm everybody who is on those streets,” he said. “We cannot let Breonna’s legacy be marred by violence and we can’t let our streets turn violent.”

In Philadelphia, Mayor Jim Kenney announced an 8 p.m. curfew, announced by police in a tweet that would end on 6 a.m. Sunday. An 8 p.m. to 5 a.m. curfew for Saturday and Sunday was also announced for Denver.

On the West Coast, Portland, Oregon Mayor Ted Wheeler announced a state of emergency, including 8 p.m. to 6 a.m. curfew. Los Angeles Mayor Eric Garcetti enacted 8 p.m. to 5:30 a.m. curfew after Friday’s protests led to 533 arrests, and fires across the city.

Flames have marked Saturday’s protests as well. In Philadelphia, police cars were set on fire near City Hall, and protesters lit fireworks around the cars. Another car was flipped over, according to The Philadelphia Inquirer. In addition, protesters set fire to a Starbucks near Philadelphia’s City Hall, as well as another café nearby.

Philadelphia was also the site of a peaceful march, sanctioned by Black Lives Matter, at the Philadelphia Art Museum. Police said in a tweet that this protest was not connected to the City Hall protests. “The demonstrators exercising their first amendment rights at City Hall and the Art Museum did so peacefully. We appreciate their voice and their manner of expression. However, since that time, others have convened in Center City and are committing criminal acts, including… vandalism. Those acts will not be tolerated, and we strongly encourage everyone to refrain from entering Center City. We will continue provide updates throughout the evening,” Philadelphia Police tweeted.

In Los Angeles, a police SUV was set on fire, as was a squad car in the Fairfax District, according to KNBC. In another incident near Hill and Seventh Street, a person threw a fire hose into a fire, according to USA Today.

At a news conference, mayor Garcetti asked everyone involved to allow order to be restored. “Whether you wear a badge or whether you hold a sign, I’m asking all of Los Angeles to take a deep breath and step back for a moment,” he said. “To allow our firefighters to put out the flames. To allow our peace officers to re-establish some order. And, to let them protect your rights to be out there.”

However, as the unrest worsened, the LAPD reportedly mobilized its entire department, including cancelling all paid time off. Officers will respond only to priority calls, according to a tweet from reporter Andrew Blankstein.

In Seattle, where it’s only the second day of protests, a police car was set on fire in the downtown area, according to KOMO. Police reportedly were detonating flash-bang grenades in the area.

Across the country, in Washington D.C., protesters knocked down a fence near the White House. An Apple Store was also looted during the protests. Police reportedly used rubber bullets and pepper spray-filled paintballs to disperse the crowd, according to The Washington Post. President Donald Trump was not at home at the time, as he was delivering a speech at the Kennedy Space Center in Florida. The protest has moved to Lafayette Park, though law enforcement remains stationed in the park and near the White House.

In Atlanta, Mayor Keisha Lance bottoms signed an executive order, instituting a 9 p.m. curfew, which ends Sunday at sunrise, according to the Associated Press. In addition, Gov. Brian Kemp deployed up to 500 members of the National Guard “to protect people and property in Atlanta,” at the request of Bottoms, according to a tweet.