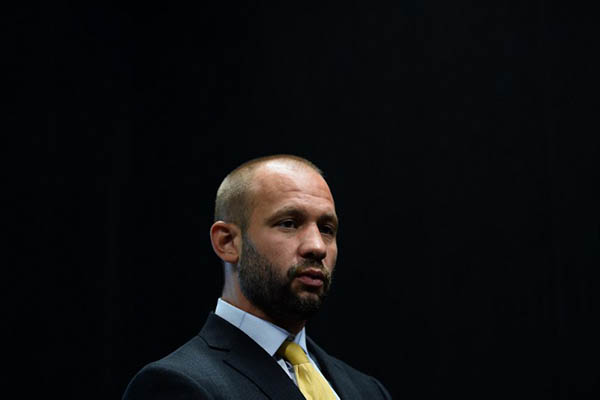 Jesse Morton says he was attracted to jihad because he had no sense of belonging or American identity.

He urged extremists to kill in the name of Allah. But Jesse Morton says he’s now a different man, countering in Washington the very same ideology that brought him in the shadow of Al Qaeda.

A Pennsylvania native who got out of prison just a year and a half ago and now conducts research at George Washington University, Morton had a rough childhood. His mother beat him, and no one else cared for him. He lost trust in society. He left home at the age of 16, lived on the street and sold drugs.

“I had no sense of belonging or American identity, I was seeking something, anything,” said Morton, 38, recalling those early days. But his is a redemption story: He offers a rare glimpse into the recruitment of a jihadist who eventually found his way back into mainstream society from radical Islam.

Morton converted to Islam when an ultraconservative Muslim friend asked him to recite a few words in Arabic—words whose meaning he did not know—during a standoff when they were surrounded by police. Those words were the shahada, the Muslim profession of faith in which one declares “there is no god but God, and Mohammed is his prophet.”

“I recited them and we didn’t get in trouble [with the police] so I thought, ‘Wow, this is like magic,’” Morton said.

Some time later, during a stay at a prison in Richmond, Virginia, he learned to become a “real Muslim.”

“In one sense, it was indoctrination from above, in another sense, it was me seeking out something and finding… meaning inside of this worldview,” said Morton, who continues to practice his Muslim faith, although he has renounced extremism.

During his jihadist days, he frequented the Islamic Thinkers Society, a group that is an offshoot of the Al-Muhajiroun extremism that seeks to restore an Islamic caliphate. Back then, he said, he had “direct contact” with Abdullah al-Faisal, a radical Jamaican imam who spent four years in prison in London. He recruited people to his cause outside mosques.

“We were looking for lions,” Morton recalled.

Morton got out prison shortly after the September 11, 2001 attacks, which he praised at the time, and took the name Younus Abdullah Muhammed. In late 2007, he co-founded “Revolution Muslim” which would relay Al Qaeda messages online.

Among the Islamic radicals who ended up being influenced by the group was Colleen LaRose, also known as “Jihad Jane”, an American woman arrested in late 2009 as she was plotting to murder Swedish cartoonist Lars Vilks, who was targeted for drawing a cartoon of Islam’s Prophet.

Police went on high alert in 2009, when Revolution Muslim threatened to kill the writers of popular animated satirical series South Park for an episode that featured Islam’s Prophet in a bear suit.

In early 2010, Morton fled to Morocco, where he was arrested by the FBI in October 2011 after a stint in Moroccan jails.

Education was the key to his turn from the path of jihadist thinking. While held in solitary confinement, a guard let him visit the prison library at night. Morton says he read a lot, including Enlightenment writers such as Jean-Jacques Rousseau. “I started to realize that these principles are universal, humanist,” he said, adding that they “allow people to be free.”

The FBI was keen on obtaining intelligence from Morton’s extremist past and his contacts in that world, so he cooperated with the U.S. federal police agency from his cell. “They made me realize that they were only protecting the public and not waging a war against Islam,” Morton said, adding that his contributions led to a “very successful series of counterterrorism operations.”

Thanks to his collaboration, Morton only served less than four years of his 11.5 year prison sentence. His recruitment by George Washington University was a first in the United States.

His life story is instructive, said Lorenzo Vidino, who heads the university’s program on extremism. Morton was “not only somebody who radicalized himself, but also somebody who was radicalizing and recruiting other people,” Vidino said.