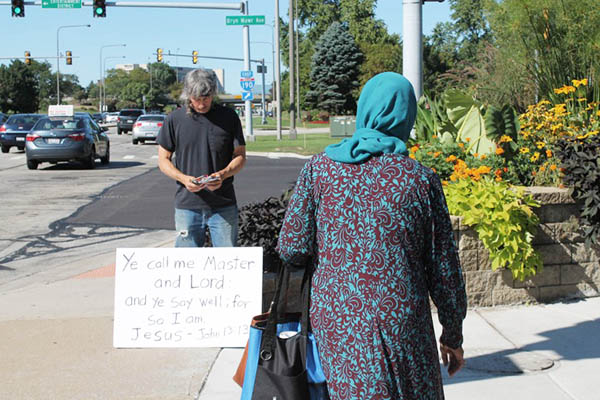 At a Starbucks café in Dearborn, Michigan, 25-year-old Mona Musid was glued to her laptop, watching a YouTube video of president-elect Donald Trump’s victory speech. This Detroit suburb is home to one of the biggest populations of Muslims and Arabs in the United States, and Musid was among many in her community on Wednesday trying to make sense of the brash Republican’s election.

“I’m just interested in what he has to say, and where it’s going to go,” she said, listening for clues in the victory speech of what her immediate future might look like. Musid said many in her extended family, who are of Yemeni ancestry and trace their U.S. roots back to the 1940s, are in a state of shock and worry.

“They don’t know what’s going to go on. They came here for opportunity. They’re just worried if he takes it away from us,” she said.

Trump’s campaign rhetoric included calls for a ban on Muslim immigrants entering the U.S., followed by promises of “extreme vetting” of immigrants from countries affected by terrorism. Across the country, Muslim Americans are now wondering what a Trump presidency might mean, said Hazem Bata, head of the Islamic Society of North America, a national advocacy group.

During his victory speech, Trump offered a conciliatory tone. “I pledge to every citizen of our land that I will be president for all of Americans,” Trump said. “All races, religions, backgrounds and beliefs.” But those words rang hollow for three sisters at The Lava Lounge, a popular lunch hangout in Dearborn.

Television news blared in front of the three fifth-generation Americans of Lebanese descent. Alyse, one of the three, who didn’t want to give her full name, said Trump’s ascendancy exposed “how much hatred there is within our country.”

“The damage is irreversible,” she said. “I feel like hard times are gonna come,” added her sister Nadeen Hider, 24. “Within one night, 60 years of progression was wiped clean.”

Trump’s victory was also as much a source of confusion as fear. At the Muslim American Youth Academy in Dearborn—an elementary and middle school—children in the morning were asking questions of each other and their parents.

“How could they elect Trump over Hillary Clinton?” asked one youngster to a group of peers and adults, who offered no answer. “Four years of nothingness,” a young girl exclaimed as she entered the school with her parents.

For some, the consequences of Trump’s victory were direct and immediate. Hiba Nasser, 19, a sophomore at Wayne State University in Detroit, said she was afraid to leave her home on Wednesday morning.

Nasser wears a hijab, the traditional Muslim head covering, and was concerned that Trump’s victory would embolden those who might target her. She said she already endures occasional harassment. “People tell me I’m a terrorist, that my being in this country is wrong, that I should go,” Nasser said.

However, there was also a counter-narrative among Muslim Americans in Dearborn—many of whom have lived in the U.S. for decades and are less concerned about immigration issues.

Often not wishing to be identified by name, several told AFP that they were happy with Trump’s victory, because they did not trust Clinton. While buying breakfast at New Yasmeen’s Bakery, Hassan Elhassani, 33, said Trump was the lesser of two bad choices.

“I am not concerned by [Trump’s] rhetoric,” said Elhassani, who emigrated from Lebanon 17 years ago and is a U.S. citizen. “If you are a citizen, he can’t change nothing.”