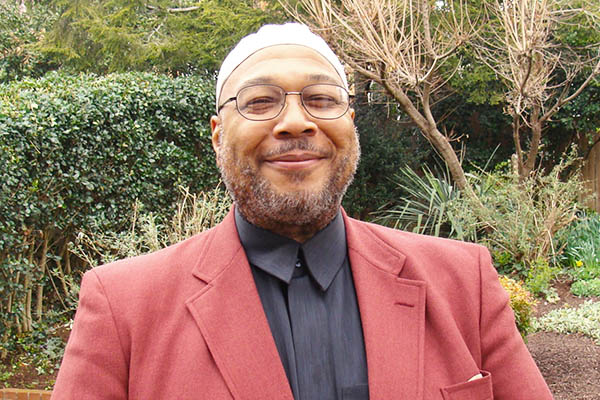 Daayiee Abdullah is helping gay Muslims reconcile their sexuality with their faith.

Daayiee Abdullah had not yet become an imam when he was called upon to perform his first act as a Muslim spiritual leader. It was the winter of 2001 and a family was desperate for someone, anyone, willing to perform the funeral rites of a gay Muslim who had died of AIDs. In a heartrending email, they told Abdullah that several prayer leaders had refused to help them and their relative had already lain in the cold confines of a morgue for over a month.

A few days later, the body was cleansed, cloaked and put to rest. “Every person, no matter who they are, has the right to proper spiritual rites,” says Abdullah. “Whoever judges you, that will be Allah’s decision, not mine.” With that one act of mercy, Abdullah became America’s first, and thus far only, openly gay imam.

Born and raised in Detroit, the former lawyer converted to Islam in the early 1980s after being introduced to the religion by Uighur friends during a visit to China. Inspired, he went on to study the faith in Egypt, Jordan, Oman and Syria, and even performed the hajj pilgrimage in Saudi Arabia—staying in the Gulf kingdom for three more years to teach English to new entrants in the Royal Air Force.

“They knew who I was,” says the 61-year-old with a grin. “The rumor was that there is something wrong with me, physically. It is easier for them to accept a transgender than a homosexual. It fits into their binary.”

Saudi Arabia is among seven countries—all Muslim—where sodomy is punishable by death. Muslim states that don’t condemn LGBT individuals to death still persecute those who deviate from heterosexual standards, and intense gender policing has forced many men and women to live closeted lives.

Pakistan, boasting the world’s second largest Muslim population, also criminalizes homosexuality due to a legal statute introduced into the Indian Penal Code of 1860 by the Colonial British Government. During Partition in 1947, Pakistan adopted the bulk of those laws into its own Penal Code—where they remain to this day. But, as Abdullah notes, transgender individuals have made strides even here. In a recent judgment, Pakistan’s Supreme Court created a “third gender” status for transgender people and encouraged the government to establish a job quota for the minority. Yet, despite these small gains, gays and lesbians in Pakistan remain in the shadows.

The U.S.-based International Gay and Lesbian Human Rights Commission, in a report on the LGBT community in Pakistan, has highlighted the abuse sexual minorities continue to face across the country. “[My] father threw a knife at me when I disobeyed him,” says one 22-year-old bisexual woman. “That is when I realized that my dad can kill me, he can literally kill me.” The rights group underscores that any legal reforms would be useless until the institution of the family is willing to accept gays and lesbians, instead of shunning them as aberrations or worse.

But while Pakistan still has a long way to go, Muslim queer rights activists in other parts of the world are becoming more prominent. According to Abdullah, it is important that this movement address both the spiritual and practical aspects of being gay and Muslim. “Some people don’t believe that homosexuals can be pious. But we can be just as good at our faith as anyone else. We are not any less committed,” he tells Newsweek, pointing out that gay imams are also operating in South Africa, France, Germany and Canada.

Two years ago, Abdullah opened a gay-friendly mosque in Washington, D.C., providing religious services for congregants with diverse cultures and sexual orientations. As part of his duties as an imam at the mosque, he officiates gay and straight marriages alike—noting he has overseen 16 marriages of same-sex Muslims couples. He hopes these actions will help lapsed gay Muslims return to the fold—realizing they do not have to abandon their faith just to be accepted for who they are.

Abdullah’s attempts at seeking acceptance for all have not been without consequences, he admits. He often receives death threats and even people who are willing to accept him as a gay Muslim caution him against being an openly gay imam. But, he says, technology can be beneficial too. After Ramzan, Abdullah hopes to launch the Mecca Institute, an online counseling service to promote interfaith dialogue. “Online is an easier way of doing things with the Muslim gay community. People feel less endangered,” he says.

totaly unacceptable has he not read quran that clearly condems not only homosexuality but also sex outside marriage. strange he is preaching some parts of quaran and denying others

Totally against the teachings of Quran.. he is denying words of Allah and miss guiding the people.. so Allah will teach him a good lesson.. just wait n watch insha Allah

SubhanAllah! Finally there is someone who stands for our gay brothers and sisters. They are among us. Please people don’t hate them. I as a modern and moderate Muslim appreciate this gesture by Dayiee Abdullah. More such Imams are needed to fight the radical controlled ideologies which are nothing but false. Islam is a religion of peace, how can we hate our gay brothers and sisters.

imams are known for sodomy with talibans.