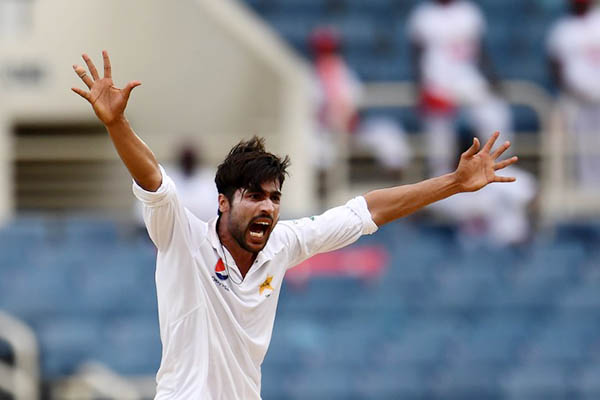 Bowling coach Azhar Mahmood admitted Pakistan were “concerned” by Mohammad Amir’s early exit from the third day’s play against Ireland at Malahide just over a week before the start of a Test series with England.

Left-arm quick Amir went off with what Mahmood said was a recurrence of a “chronic” left knee injury after a brief spell in Test debutants Ireland’s second innings after Pakistan enforced the follow-on on Sunday.

It was a frustrating end to the day for Amir, with the 25-year-old having both Ed Joyce (39 not out) and captain William Porterfield (23 not out) dropped off his bowling in that 3.2 over burst before the openers took Ireland to 64 without loss at the close—still 116 runs behind Pakistan’s 310 for nine declared.

Amir was given a jail sentence by an English court and a five-year ban by the International Cricket Council. He made his return to the world stage two years ago, with Mahmood suggesting Amir’s lengthy time away from the game allied to the fact he had been involved in all three international formats—Tests, one-dayers and Twenty20s—since coming back had taken a toll on Amir, who last season helped Essex win English cricket’s first-class County Championship.

“Unfortunately, he came back after five years [out] and since he came back he has played every format for us,” said Mahmood, himself a former Pakistan pace bowling all-rounder. “We have to manage his workload as well so maybe that’s a sign for us to in the future to see where he stands. We are working on that, and hopefully we can come up with something.”

Meanwhile Mahmood was clear Pakistan did not want Amir, who has taken 95 wickets in 30 matches before this match, concentrating solely on limited-overs cricket as a fitness measure. “We want him to play Test cricket because he’s our number one bowler and we want him to run in and bowl for us so if workload—I have seen a lot of bowlers and their bodies can’t take it, so they just manage to play one format or two formats,” explained Mahmood, who starred in county cricket for both Surrey and Kent. “But for him, it’s a concern for us and hopefully we will manage his workload in the future.”

As for Amir’s prospects of bowling again in this lone Test with Ireland, Mahmood said: “He has got a chronic knee problem which has slightly flared up. Hopefully, he will be ok tomorrow to bowl for us. He’s having treatment and hopefully tonight we will do a bit more treatment, tomorrow morning, ice as well, so he will be fine.”

Amir took two for nine in 10 overs as Pakistan dismissed Ireland for a meager 130 in their first innings at this level—a total still well above England’s 58 all out in a Test against New Zealand at Auckland in March.

The day might have been even better for Pakistan had they held on to the two second-innings chances created by Amir. “If you drop catches, with the amount of potential these guys [Joyce and Porterfield] have—it’s around 25,000 first-class runs you know batting at the crease,” added Mahmood. “If you give them opportunities, they are good players so they can take it. But tomorrow is a new day so we can come out fresher.”