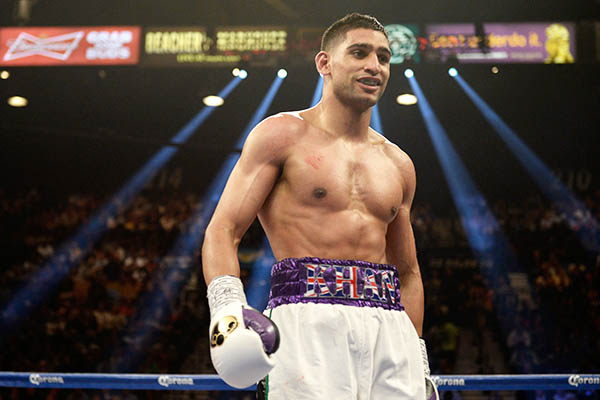 British-Pakistani boxer wishes luck to Andre Berto, who will be Mayweather’s next opponent in September.

Britain’s Amir Khan took the high road Wednesday after being snubbed by unbeaten American Floyd Mayweather for a third time in quest of a high-profile Las Vegas welterweight showdown.

Mayweather, 38, announced Tuesday that he would fight countryman Andre Berto next month in what the 48-0 champion has declared would be his final fight, although many doubt he will settle for retiring at the same iconic record as the late heavyweight Rocky Marciano without taking a chance at 50-0.

But first, Mayweather must get past Berto, and that, Khan also warned, is something that is not a sure thing. “I wish my stablemate Andre Berto and trainer Virgil Hunter the very best of luck in the fight,” Khan said. “I’ve seen how hard Andre trains and works and know that he is ready to give Floyd a very tough night.”

Khan was teased about possible Mayweather fights last year that instead went to Argentina’s Marcos Maidana and Mayweather finally fought the long-awaited bout against Filipino icon Manny Pacquiao last May, winning by unanimous decision. “I’m disappointed not to have got the fight for what is the third time after having been one of the frontrunners,” Khan said. “However, there are many big fights out there for me and I’m going to continue working hard to establish myself at the top of the welterweight division. Floyd Mayweather has fought the biggest names throughout his career and has earned the right to face whoever he chooses.”

Many have criticized Mayweather’s choice as too easy a foe, with Berto having dropped three of his past six fights. Mayweather will speak about his choice for the first time Thursday at a Los Angeles news conference to begin promotion for the fight, now just five weeks away.