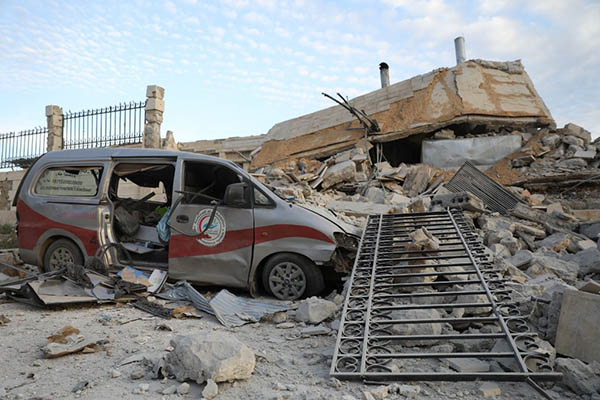 The Syrian regime and its ally Russia are engaged in a “deliberate and systematic assault” on hospitals in the country’s northwest, Amnesty International said on Friday.

The U.N. Security Council was holding an emergency session on Friday to discuss the situation in Syria’s Idlib, a jihadist-controlled region that has come under increased regime and Russian bombardment. The majority of strikes have hit southern Idlib and the north of neighboring Hama province, areas controlled by Syria’s former Al Qaeda affiliate Hayat Tahrir al-Sham (HTS).

“We are urging Security Council members meeting today to do everything in their power to end the onslaught against civilians in Idlib and hold the perpetrators of these appalling crimes to account,” said Lynn Maalouf, Amnesty’s Middle East research director. The rights group called “for Russia to be pressured” by the Security Council “over the deliberate targeting of 15 hospitals in Idlib and Hama.”

At least 18 hospitals and clinics have been destroyed or damaged by airstrikes and shelling over recent weeks, according to the United Nations. “This is part of a well-established pattern targeting medical facilities to systematically attack the civilian population and it constitutes crimes against humanity,” Maalouf said in a statement.

The attacks against hospitals took place despite a U.N. mechanism aimed at sparing medical facilities from the fighting. Amnesty said staff from four hospitals told the organization they had been targeted “despite sharing their coordinates with the Syrian and Russian governments.”

Idlib’s population of three million is meant to be protected by a buffer zone deal signed in September by Russia and rebel-backer Turkey. But the increase in attacks from late April to May 9 has prompted 180,000 people to flee southern Idlib and northern Hama, according to U.N. figures.

Millions have been displaced and more than 370,000 killed since Syria’s civil war erupted in 2011 with the violent crackdown on anti-government protests.