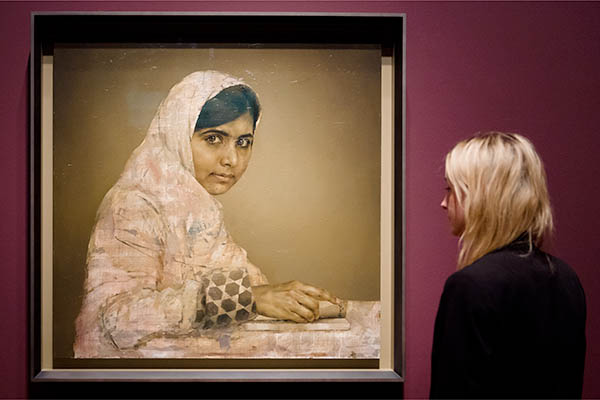 Rights group Amnesty International announced on Tuesday it had awarded its highest honor to Malala Yousafzai, the Pakistani teen shot by the Taliban last year for advocating girls’ education.

Malala will share the 2013 Ambassador of Conscience Award with American singer and human rights activist Harry Belafonte, the London-based NGO revealed. Irish rock singer Bono will present the award, which recognizes “individuals who have promoted and enhanced the cause of human rights through their life and by example,” at a ceremony in Dublin, Ireland on Tuesday.

“Our two new Ambassadors of Conscience are different from each other in many ways, but they share a dedication to the fight for human rights everywhere and for all,” said Salil Shetty, secretary general of Amnesty International. “Harry and Malala are truly Ambassadors of Conscience, speaking up for universal rights, justice and human dignity and inspiring others to follow their example.”

Malala was shot in the head by the Taliban on a school bus last October, an attack that drew worldwide condemnation. She was flown to Britain for surgery for her head injuries and returned to school in Birmingham in March.

The 16-year-old said she was “truly honored” to receive the award. “I would like to take the opportunity to remind everyone that there are many millions of children like me across the world who fight every single day for their right to go to school,” she added. “I hope that by working together we will one day realize our dream of education for every child, in every corner of the world.”

“I am especially honored to receive the Ambassador of Conscience Award because I am having the distinction of sharing this with Malala Yousafzai, a true hero of our time,” he said. “My admiration for her is unending. She has awakened many in the global family to a commitment in struggle against tyranny. For all this I remain eternally grateful.”

Do taliban seriously want return to stoneAge.Their agenda of No-education ie Illitracy for Girls,No to Work for women & fastforward to Poverty,destitution& Begging for US aid seems perverse.Pakistan lives in extreme poverty because of this Gender,Caste supression & violence towards other sects of Muslims, instead of inclusivness unity which brings Strenght & Prosperity.All the while Pakistains neighbours march to Advancement & world Status! Try do some Serious Research,Do your Homework & you all will Suceed & then be able to prevent hostile USA Drones blowing your Kids, civilians all over SE Asia & Palestine.How does USA get away with this Carnage.Coz None of Muslim Nations are capable of manufacturing Drones & of protecting their own.Unlike India,China who follow some Democratic principles & are making sucessful progress.