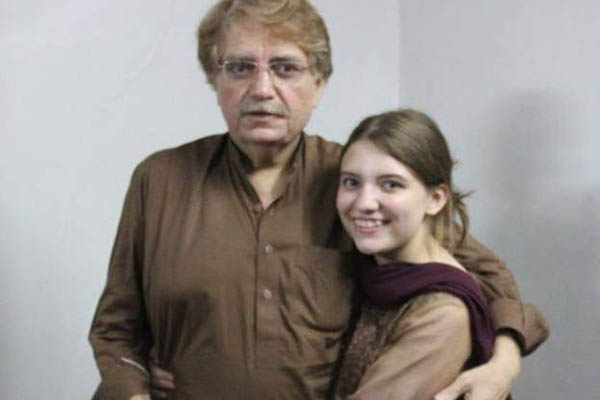 Idris Khattak with one of his daughters. Courtesy Amnesty International

Human rights activist went ‘missing’ on Nov. 13, 2019, with Ministry of Defense confirming in June he was in its custody

Human Rights group Amnesty International on Friday called on the Government of Pakistan to “immediately” disclose the location of activist Idris Khattak, whose exact whereabouts remain a mystery a year after he went “missing.”

“A year after he was taken from them, Idris Khattak’s family remain completely in the dark about where he is being kept, his state of health, and the legal process he is being put through, if any,” said Omar Waraich, head of Amnesty International’s South Asia operations. “The Pakistani authorities must end this intolerable situation by disclosing his whereabouts and allowing him regular access to his family and lawyer,” he added.

Khattak, a human rights activist who has been campaigning for an end to “enforced disappearances” for several years, was “abducted” while traveling from Islamabad to Peshawar on Nov. 13, 2019. After more than six months of no information on his whereabouts, the Ministry of Defense confirmed that he was in their custody and had been charged with treason under the Official Secrets Act—a charge punishable by death. He would be tried in a military court, they added.

“As with all enforced disappearance cases, Idris Khattak’s legal status has been shrouded in unacceptable secrecy. No information has been provided about the nature of the charges against him, whether he has legal representation, or even if his trial has started,” said Waraich. “As a first step, the Pakistani authorities must bring him before a judge in a civilian court to rule on the lawfulness of his arrest and detention,” he added.

In its statement, Amnesty International has raised questions about the use of a military court for the trial, noting that these courts often flout due process and human rights and lack any transparency. “Moreover, the OSA is a law that can only be used to charge state officials, not civilians,” it added.

Khattak’s family has repeatedly asserted that he suffers from diabetes and back problems. Due to a lack of any information about his circumstances, it is unclear if he has access to the medical care he needs while in detention. “Following promises of a clampdown by the government, enforced disappearances remain an all-too-common occurrence in Pakistan. Despite an open admission from the authorities that Idris Khattak was abducted, those responsible have enjoyed complete impunity so far,” said Waraich. “The Pakistani government must immediately make good on their pledge to criminalize this cruel practice,” he added.

According to an application submitted by Khattak’s family to police, four plainclothes men “abducted” Khattak and his driver on Nov. 13, 2019. The driver was released on Nov. 15. Amnesty has noted that the incumbent Pakistan Tehreek-e-Insaf government was elected on promises to end enforced disappearances. As recently as September, Human Rights Minister Shireen Mazari tweeted that Prime Minister Imran Khan found the practice “unacceptable.” Despite this, there has been no progress on any legislation to criminalize the practice or ensure it is eradicated.