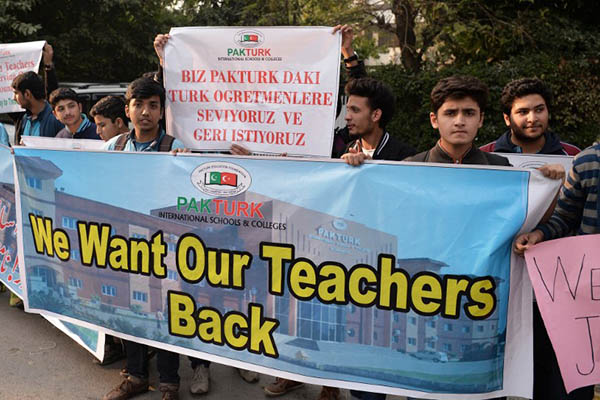 Students, teachers demonstrate against Islamabad’s decision to force around 450 people to leave by Nov. 20.

Pakistan’s decision to deport dozens of Turkish teachers was “politically-motivated,” Amnesty International said on Thursday, and sparked small demonstrations in major cities as Turkey’s president wrapped up a state visit to the country.

Islamabad confirmed on Wednesday it had ordered the deportation of 130 teachers along with school staff and their families—some 450 people in total—by Nov. 20.

Several hundred students in Islamabad, Lahore and Karachi demonstrated against the decision, which was also condemned by local media after it was made public on Wednesday as President Recep Tayyip Erdogan arrived for a two-day visit.

School officials say up to 10,000 students will be affected, a blow to education in Pakistan where government figures say a staggering 24 million children are already out of school. The move “will only hurt Pakistan’s children,” Amnesty International said in a statement. “What the country needs is more classrooms and more teachers, not a politically-motivated decision to purge educators at the behest of the Turkish government,” the rights group’s South Asia Director Champa Patel said.

“The sudden move to issue marching orders, and that too on the eve of Mr. Erdogan’s visit, smacks of intentions that may have nothing to do with the quality of teaching or education,” said an editorial in Pakistan’s biggest English-language newspaper Dawn.

Around 200 parents and students voiced outrage at the decision during the demonstration in Islamabad on Thursday, waving placards and calling for “justice.”

“We want our teachers to stay, we want to study,” said 17-year-old student Abdullah Tahir. “Of course we all know that they [the teachers] are not terrorists. Why are we treating them with cruelty? Like if they go back to Turkey, they will also arrest them. What is their mistake?”

Aafia Malik, a mother with two children in Pak-Turk schools, said the move was “playing with the future of our children.”

“They are trying to build our future, and why isn’t our government thinking along these lines?” she said.

Erdogan praised the move at a press conference with Prime Minister Nawaz Sharif and during a later address in Parliament, branding Gulen’s group “evil” and “a terrorist organization” that is also a threat to Pakistan. He thanked Islamabad for its “solidarity,” and promised Pak-Turk students would be cared for at “the highest standards.”

Erdogan, accompanied by a high-level entourage as well as a large business delegation, also accused the West of supporting the Islamic State group, saying that “Western-origin weapons” had been found in the hands of captured jihadists. “Who is this all done against? Let’s be careful, it is done against the Islamic world,” he said.

He also called for a resolution “through dialogue” to unrest in disputed Kashmir after months of tensions between India and Pakistan.