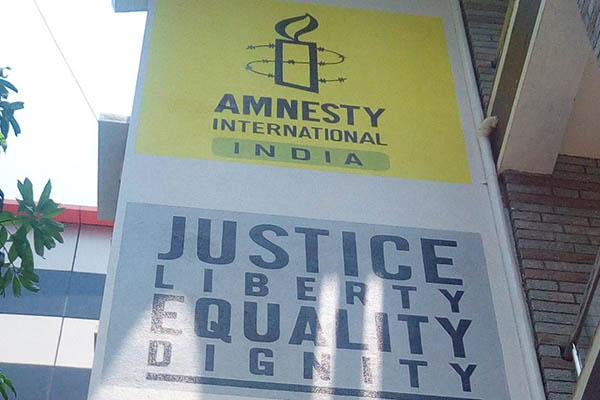 Alleging government harassment, the organization said it was being punished for highlighting human rights abuses

Human rights group Amnesty International on Tuesday announced it was suspending operations in India after the government froze its bank accounts in what the organization has described as the latest action targeting its criticism of human rights violations.

“The organization has been compelled to let go of staff in India and pause all its ongoing campaign and research work. This is latest in the incessant witch-hunt of human rights organizations by the Government of India over unfounded and motivated allegations,” read an Amnesty International India statement. It said the bank accounts were frozen on Sept. 10, adding that this was no accident.

“The constant harassment by government agencies including the Enforcement Directorate is a result of our unequivocal calls for transparency in the government, more recently for accountability of the Delhi police and the Government of India regarding the grave human rights violations in Delhi riots and [India-held] Jammu and Kashmir. For a movement that has done nothing but raise its voices against injustice, this latest attack is akin to freezing dissent,” said Avinash Kumar, executive director of Amnesty International India.

Stressing that the human rights watchdog was in complete compliance with all applicable Indian and international laws, Amnesty said it primarily raises funds domestically for its work in India. “More than four million Indians have supported Amnesty International India’s work in the last eight years and around 100,000 Indians have made financial contributions,” it said.

According to the organization’s statement, India’s linking of their donations to the Foreign Contribution (Regulation) Act, 2010 was a “malicious” attempt to punish human rights activists and groups that challenge the government’s grave inactions and excesses.

“Treating human rights organizations like criminal enterprises and dissenting individuals as criminals without any credible evidence is a deliberate attempt by the Enforcement Directorate and Government of India to stoke a climate of fear and dismantle the critical voices in India,” said Kumar. “It reeks of fear and repression, ignores the human cost to this crackdown particularly during a pandemic and violates people’s basic rights to freedom of speech and expression, assembly, and association guaranteed by the Indian Constitution and international human rights law. Instead, as a global power and a member of the United Nations Human Rights Council, India must fearlessly welcome calls for accountability and justice,” he added.

News agency Reuters said that there was no immediate response from government spokesmen to requests for comment on the development.