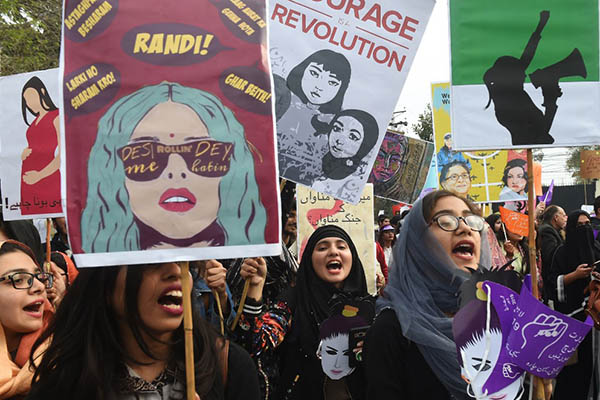 Amnesty International on Thursday joined a growing chorus of voices supporting Pakistan’s third annual Aurat March, saying it stands in solidarity with all those participating.

In a press release, the rights body called on the Government of Pakistan to ensure that the marchers’ rights to freedom of expression, association and peaceful assembly are protected, especially with a rise in vitriol among the rally’s detractors both on and off social media.

According to the Amnesty statement, the threats of violence, intimidation and harassment being hurled at marchers who are merely demanding their due rights underscores the necessity of the Aurat March. “In the World Economic Forum (WEF)’s Global Gender Gap Index Report 2020, Pakistan ranked 151 out of 153 countries, indicating a dismal record on human rights for women. It charts at the very bottom of the seven South Asian countries included in the Index,” it added.

This year, Amnesty notes, there has been considerable backlash from several quarters and even attempts to block the Aurat March from taking place at all. Last month, a petition was submitted before the Lahore High Court calling for a ban of the Aurat March. This was dismissed as an unconstitutional plea.

Subsequently, the Jamiat Ulema-e-Islam, led by Maulana Fazlur Rehman, accused the Aurat March of “vulgarity” and called upon the party’s workers to block it and be prepared for “any sacrifice” should the government provide security to the march. Earlier this week, a mural in Islamabad depicting two women standing in solidarity with the Aurat March was defaced, with female students of the Jamia Hafsa madrassa claiming responsibility for it in a video circulated on social media.

In the most recent example of harassment of Aurat March defenders, writer and director Khalilur Rehman Qamar abused activist Marvi Sirmed on live TV in what has been termed as “vulgar and obscene” language by the Pakistan Electronic Media Regulatory Authority.

“Every day, women in Pakistan are bullied, discriminated against and arrested, physically attacked and killed, simply for making choices about their bodies and the way they live their lives. The people who commit these crimes are the ones who must be stopped, not the protestors,” added Mohydin of Amnesty.