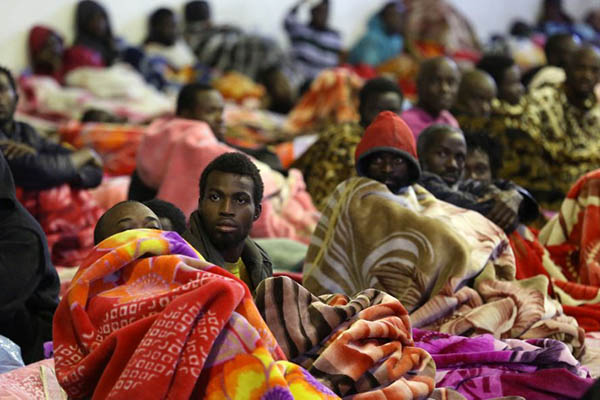 Amnesty International on Tuesday accused Italy and other E.U. governments of being “knowingly complicit” in horrific abuses of migrants in Libya, warning of legal action against them at European and U.N. rights institutions.

The charges by the London-based rights group mark a ratcheting up of criticism by activists and others of the European Union’s policy of aiding the U.N.-backed government in Tripoli in order to stop migrants from traveling to Europe. “European governments are knowingly complicit in the torture and abuse of tens of thousands of refugees and migrants detained by Libyan immigration authorities in appalling conditions in Libya,” Amnesty said in a report.

European governments are “actively supporting a sophisticated system of abuse and exploitation of refugees and migrants by the Libyan coastguard, detention authorities and smugglers in order to prevent people from crossing the Mediterranean,” Amnesty said. “The various E.U. governments, Italy in particular, know full well that this is going on,” Amnesty’s Europe Director John Dalhuisen told AFP in Brussels. “This system puts Italy in particular very much in breach of its international obligations,” especially on the prohibition of torture, Dalhuisen added.

Italian Prime Minister Paolo Gentiloni rejected the accusations later Tuesday, telling lawmakers in Rome that Italy could “hold its head high” with regards to its treatment of migrants.

The accords with Libyan authorities, he said, had led to a sharp reduction in new arrivals to European shores and the entry of U.N. agencies into Libya, which were helping to increase voluntary returns to home countries. Italy “can be proud of being the country that sets a good example for Europe, both in welcoming and saving lives at sea, and in inflicting serious, measurable and I hope long-lasting defeats on human traffickers,” Gentiloni said.

But Amnesty’s Dalhuisen alleged that Italy, the main landing point for migrants sailing from Libya, has of all the E.U. governments “the most sophisticated set of arrangements” with Libyan Prime Minister Fayez al-Sarraj’s government to detain migrants. He said Amnesty and other people he did not identify were preparing to take the charges to the European Court of Human Rights in Strasbourg, the U.N.’s Committee Against Torture and its Human Rights Committee.

The Amnesty report amounts to “the presentation of an argument that will subsequently provide the material for us and I’m sure others to litigate,” he said.

Amnesty, citing testimony from dozens of migrants, said officials in the Libyan coastguard, trained and equipped by European governments, notably Italy, “are known to operate in collusion with smuggling networks and have used threats and violence against refugees and migrants.”

Dalhuisen said the Libyan authorities, militias, armed groups and smugglers are “often working seamlessly together for financial gain.” Migrants whose boats have been intercepted are sent to detention centers “where they endure horrific treatment. Up to 20,000 people currently remain contained in these overcrowded, unsanitary detention centers,” Amnesty said.

Amnesty said it studied video footage, pictures and documents indicating that a boat, the Ras Jadir, which Italy donated in April to the Libyan Coast Guard, contributed to the drowning of up to 50 people on Nov. 6 as a result of “reckless actions” by its crew. It said for example that the Ras Jadir ignored security protocol when it approached a sinking inflatable boat full of migrants 30 nautical miles off the Libyan coast.

The Ras Jadir then failed to deploy its own inflatable boat to rescue migrants, allegedly forcing them to climb its high sides before many of them fell back into the water. A nearby NGO vessel, Sea-Watch 3, deployed its inflatable boats in a rescue bid but footage shows those aboard the Ras Jadir throwing objects to force the migrants away, the rights group said.

Amnesty said the footage also shows migrants aboard the Ras Jadir being whipped with a rope and others trying to jump into the water to try to reach the rescue vessels. The German charity Sea Watch said at the time that five migrants including a young child died as the result of a “violent, reckless” and “illegal” intervention by Libya’s coastguard in international waters.

The U.N.-backed government in Tripoli said on Saturday that Italy and Libya are to set up a joint commission in an attempt to fight back against people traffickers and tackle illegal migration. Human-trafficking networks have flourished in the chaos that followed a NATO-backed uprising, which toppled long-time Libyan dictator Muammer Gaddafi in 2011.