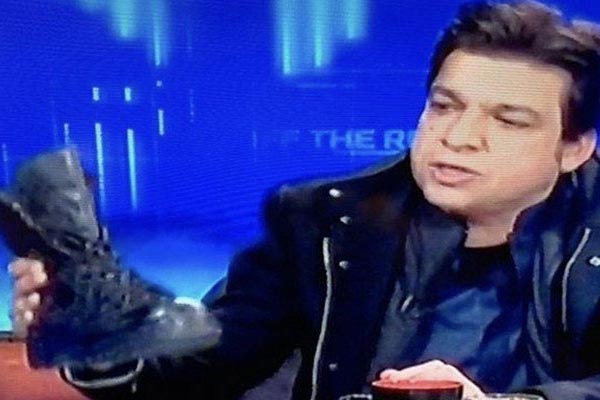 PEMRA, late on Wednesday, issued a notification saying it was imposing a 60-day ban on Abbasi and his TV show, Off the Record, after the actions of one his guests provoked controversy and drew scorn from viewers.

On Tuesday, Water Resources Minister Faisal Vawda appeared on Off the Record alongside opposition lawmakers Qamar Zaman Kaira and Javed Abbasi. During the broadcast, Vawda pulled out an army regulation boot and placed it on the table, seemingly to ridicule the opposition for backing the passage of legislation to extend the tenure of the Army chief Gen. Qamar Javed Bajwa. Vawda mocked the opposition, saying they all lining up to “kiss the boost,” and claimed he would now bring the boot to every talk show he participated in. He also criticized the Pakistan Muslim League (Nawaz) for backing down from its stance of ‘Respect the Vote,’ by saying they should instead ‘Respect the Boot.’

Vawda’s commentary has been widely seen as him mocking the institution of the Pakistan Army, and trying to sow discord when the opposition and treasury are having an all-too-rare moment of bonhomie.

PEMRA, in its notification, slammed Vawda’s “unethical act,” adding that his subsequent arguments were also “an attempt to debase a state institution.” It criticized Abbasi for failing to intervene and stop Vawda during the live broadcast, saying “rather [he] took the entire incident casually and kept smiling/cherishing such occurrence.”

It said that the contents of the show appeared to be a “willful attempt to debase and demean a state institution by dragging it unnecessarily in a debate,” and Abbasi’s actions violated “clauses 3(1)(e,j), 4(7)(b), 4(10), 5, 13, and 17” of the Code of Conduct prescribed by PEMRA. These clauses bar media from airing “indecent” content that casts aspersions against the judiciary or armed forces, and require a delaying mechanism for live shows to ensure conformity to the code.

The PEMRA notification concluded by imposing a 60-day ban on Off the Record, and a similar 60-day ban on Kashif Abbasi that bars him from appearing on TV in any capacity, on any channel, during this time. There has been no ban announced on Vawda, who the notification otherwise makes clear was the prime instigator of the “abuse” directed at the armed forces.