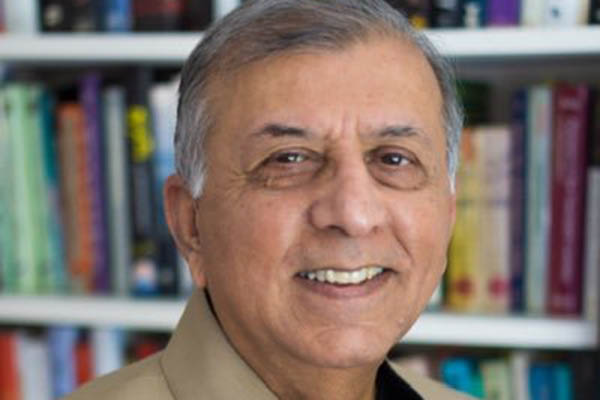 Why was author Shuja Nawaz forced to cancel the Pakistan launch of his new book on Pak-U.S. ties?

Shuja Nawaz, well-known author of Crossed Swords, a history of the Pakistan Army, recently returned to his homeland to launch The Battle for Pakistan: The Bitter U.S. Friendship and a Tough Neighborhood. Unfortunately, authorities discouraged him from doing so, forcing him to return to his home in the U.S. without collecting the kudos he deserves for writing a “revealing” book.

One gathered that the book launch was cancelled because the text reveals a bit too much for Pakistanis to stomach if the country’s Urdu press had picked it up. One such “risky” revelation lifted the veil on who actually informed the U.S. of the presence of Osama bin Laden in Abbottabad. The prevailing wisdom, as conveyed by American authors, had claimed one Brigadier Captain Unman Khalid of the ISI had walked into the U.S. embassy in Islamabad and spilled the beans in exchange for head money. Nawaz’s version is rather different.

In his book, Nawaz alleged that it was another officer, Lt. Col. Eqbal Saeed Khan of the ISI, commissioned in the 4th War Course into the Pakistan Army and who did his Intelligence Staff Course in 1993, that had been complicit. Known to his comrades as ‘Bailee,’ a Punjabi equivalent to “buddy,” Khan was reportedly retired prematurely by his Army chief for dealing in fake currency. Another report had him being passed over for promotion to brigadier and then prematurely retired.

“Col. Saeed, who ran a security firm in Islamabad, may have been responsible for providing logistic and surveillance assistance to the Americans in tracking and locating movements related to what turned out to the final lair of bin Laden in Abbottabad,” says Nawaz’s book. “Col. Saeed’s office in Abbottabad is reported to have been used as a listening and staging post. He is reported to have been recruited by Lt. Col. Hafeez, his predecessor at the helm of the 408 Intelligence battalion, who had been hired by the U.S., and according to one report, was even in the U.S., and that CIA Director George Tenet once brought him to a meeting with Gen. Kayani,” it adds.

“According to another senior retired ISI officer, Saeed may have been rewarded by the Americans for having kept mum about the final stages of the search for bin Laden’s hideout in Abbottabad. Another retired brigadier was also prominently mentioned in assisting the search for bin Laden, but no formal inquiries in Pakistan have been shared with the public. Indeed, the Abbottabad Commission that was set up by Pakistan to investigate the raid that killed bin Laden appeared to clear Col. Saeed. And a very senior military officer who spoke with me about a brigadier implicated in that case also indicated that they had not found much on him. The brigadier was not mentioned in the report.”

Despite the commission’s clearance, author Nawaz has gathered information that raises several questions: “Col. Saeed suddenly decamped from Pakistan immediately after the raid on Abbottabad, leaving behind an empty home in the DHA at Morgah, days before his child’s high-school exams and even as his second wife was reported to be recuperating from a medical procedure. The house was then disposed of by the manager of his security firm, according to a former colleague of the colonel. He is [now] living in San Diego, California, owns a $2.4-million home under his own name and also operates under the name Bailey (sic!) Khan, a Western variation of his nickname, Bailee, in Pakistan. In May 2018, photographs emerged of the colonel and his wife enjoying their new life. A white BMW convertible with California license plates is visible in some of the photos of the dapper colonel.”

The book is full of similar unsavory revelations. Another deals with how journalist Saleem Shahzad came to be killed. Bureau chief of Asia Times Online in Pakistan, Saleem wrote an article challenging the official version of a 2011 terror strike. Headlined Al Qaeda had Warned of Pakistan Strike, the article alleged that the attack on the Mehran Naval Base in Karachi in 2011 was not by the Tehreek-e-Taliban Pakistan or its affiliates but by Al Qaeda, after the failure of talks between the authorities and Al Qaeda on the release of Al Qaeda sympathizers whom the military had uncovered and taken into custody.

Shahzad had alleged that the military had been penetrated by such elements and cited an anonymous military source. Shahzad published a book on the topic that detailed infiltration by militants into the Pakistani military. His “revealed” links between the ISI and militant organizations created a public furor and might have raised hackles inside the security services.

Shahzad had earlier been approached by the ISI to retract a story he had published on March 25, 2011, in which he alleged that bin Laden was on the move inside Pakistan and hinted at knowledge of Pakistani intelligence about this movement.

“The next morning, he got a phone call from an officer at the ISI, summoning him to the agency’s headquarters in Aabpara, a neighborhood in eastern Islamabad. When Shahzad showed up, he was met by three ISI officers. The lead man, he said, was a naval officer, Rear Admiral Adnan Nazir, who served as the head of the ISI’s media division.

“They were very polite, Shahzad said. They don’t shout, they don’t threaten you. This is the way they operate. But they were very angry with me.” The ISI officers allegedly asked him to write a second story, retracting the first. He refused. And then Admiral Nazir made a remark so bizarre that Shahzad said he had thought about it every day since. “We want the world to believe that Osama is dead,” Nazir said.

Shortly after, Saleem Shahzad was kidnapped, beaten to death and thrown into a canal. His killers have yet to be found. Nawaz’s interview with Shahzad before the latter’s death could well have proved the last straw. Is it any wonder that the author had to fly out of Pakistan without launching his book?