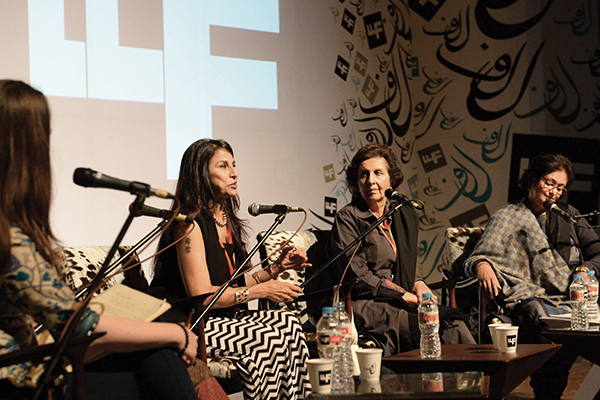 Pakistan has forged a place for itself on the literary map.

The single best thing about it this year, as was also the case last year, was the visible enthusiasm of the attendees, largely nauseatingly fresh-faced students who came in their droves, ready to pour into the Alhamra for 10 a.m. sessions on a weekend.

Open to the public with no entry fee and no ticketed sessions—unlike Britain’s big literary shebang, the festival at Hay-on-Wye—LLF, like every other cultural endeavor in Pakistan, first found itself fending off accusations of elitism—largely from the elite.

Aside from the fact that Pakistan has a literacy rate of about 55 percent and that reading a newspaper is an elitist activity here, LLF is not a state-funded event; it is run by private sponsors and as far as I can see, if they wish to feature 75 sessions on how lovely their garden looks—not the case I hasten to add—they are welcome to it. The hope for such events is that they proliferate and that other people are inspired by the hearty response to perhaps set about organizing similar gatherings that reflect their own concerns.

In any event, this festival included conversations with Seth and Hanif; multiple book launches; sessions on Pakistan’s changing relationship with India, with Afghanistan, its rather depressing changing relationship with itself; sessions about women in Punjabi literature; the representation of the body in South Asia; and at least two sessions that focused on political satire, a subject which I feel Pakistani writers tackle better than anyone else in this region.

Aside from the inadvertent hilarity (such as the diminutive volunteer I overheard trying to attract a gray-haired panelist’s attention with “Uncle, uncle, idhar aaiye”), the session that had the audience clutching their sides was TFT publisher Jugnu Mohsin in conversation with Ali Aftab Saeed. Mohsin spoke what will in May be the weekly’s 25-year-old tradition of lampooning the great and the good, including the late Benazir Bhutto, Pervez Musharraf, Nawaz Sharif and Imran Khan. “Satire,” Mohsin said, “is in some ways a reaction to helplessness. And I think it’s a healthier reaction than the increasingly bizarre conspiracy theories which a great deal of the country is opting for.”

And on the topic of bizarre conspiracy theories, I overheard an audience member in pearls and silk hijab discussing a book she’d recently completed “celebrating Islam.” She took pains to explain that it was not a “victim saga made up by the West like Malala.” I took another look at her to see if perhaps she too had been shot in the face at some point, but all I could conclude was that the hijab must be there to hide her lobotomy scars.

If there was insanity among some audience members, there were at least sane voices on stage at one of my favorite sessions, “Women on the Verge,” moderated by the rather brilliant historian Alex von Tunzelmann and featuring De, Manju Kapur, Muneeza Shamsie and Namita Gokhale, who, incidentally, is the author of my very favorite work of South Asian fiction, the novel Paro.

Paro is a social satire Nancy Mitford would be proud of writing, and precisely the sort of book that finds itself sidelined as “frothy women’s writing,” as if a book written by a woman about women caters to some sort of specialized audience while men make up society proper. It is especially perplexing as women comprise the bulk of the book-buying public in the U.K. and in the United States.

“Women tend to write sex differently from men,” said Gokhale, “as they first need to reclaim their bodies from their husbands, their sons, from their family’s honor.” Muneeza Shamsie observed that when commenting on women’s writing, one too often heard about their private lives and wondered if the Brontës would find their sex lives examined and exist in the collective public imagination as sad, unmarried people living on the Moors as male authors. “Someday,” said Kapur, “women’s writing will be writing, and men’s writing will be men’s writing.” Amen.

On the frustrating side, the programming this year saw too many of the really exciting sessions running parallel to each other and the missed opportunity came in the form of the new crop of Karachi writers who are changing Pakistani fiction in English as we know it.

Omar Shahid Hamid, author of The Prisoner, Bilal Tanweer, author of The Scatter Here Is Too Great, and Saba Imtiaz, author of Karachi, You’re Killing Me!, did not launch their books here as they ought to have, and instead found themselves speaking at only one panel, the moderation of which left some room for improvement and didn’t fully explore the truly exciting moment Pakistani English fiction is currently enjoying. These authors are writing stories for other Pakistanis, not books geared at explaining Pakistan to a bewildered West. Like Shazaf Fatima Haider whose novel How It Happened came out last year, more Pakistanis are now producing genre fiction—thrillers and comedies along with literary fiction, books that are deeply intertwined with the local.

The alleged literary boom heralded by four or so excellent novelists some four years ago is now materializing into what resembles an actual literary landscape with both literary and commercial fiction and books that fall between these two axes. This is due cause for celebration, and one hopes to see many more authors such as these at work in Pakistan and being lauded at future LLFs. It seems more likely than ever that Pakistan has forged a place for itself on the literary map and that it’s here to stay.