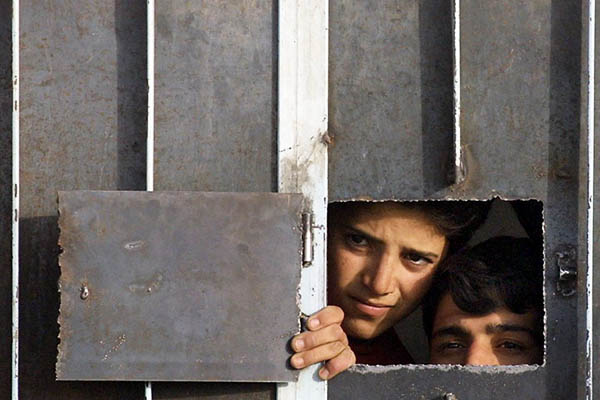 Indoctrination, promises of glory in the afterlife feature in militants’ training of potential suicide bombers.

At first glance Mohibullah looks an ordinary Afghan teenager, wide-eyed with a tender smile, a little peach fuzz and a boyish dream of becoming a kick boxer. But this 15-year-old is languishing in prison—jailed after the Taliban preyed on him to become a suicide bomber.

The runaway teen was apprehended in 2014 as he was about to blow himself up outside a district governor’s office. The failed mission has left him locked up in juvenile detention in Kandahar city.

Mohibullah’s eyes welled up as he described how he was indoctrinated about the glories of martyrdom as a shortcut to a paradise, filled with chaste virgins and lakes of milk and honey. “You will feel no pain when you detonate your suicide vest,” he quoted one of his handlers as saying in an AFP interview inside the prison. “You will instantly be in heaven’s embrace.”

Mohibullah, whose story offers troubling insight into how Afghanistan’s conflict has metastasized into a hidden war on children, was nervously slouched in a chair in the prison warden’s office, dressed in a green vinyl jacket and embroidered Kandahari hat. Prison authorities were present during the interview.

Behind him, on a white board, were scrawled in Pashto the crimes of fellow inmates: robbery, adultery, sodomy, planting land mines. His handlers, he said, made him choose from a list of five high-profile targets. He picked one he considered pregnable: the district chief of Arghandab in Kandahar, a lush region filled with grape and pomegranate groves.

With hugs, garlands and the promise of an eternal afterlife, he said he was taken on a circuitous journey to Arghandab, passing from one handler to the next, spending nights in the back of cars. Tipped-off officials arrested him before he could reach his target and he was sentenced to four years in a juvenile prison.

Mohibullah’s fingers fidgeted nervously in his lap as he spoke, his shoulders sagging apparently under the weight of his own words.

Mohibullah claimed during the interview that his indoctrination took place at one of the thousands of unregulated madrassas in Pakistan, many funded with Saudi money. Afghan officials claim they are a prime Taliban recruiting ground. Kabul has fraught relations with Islamabad, which it blames for sponsoring the insurgency, and the Pakistani government recently admitted after years of official denial that the Taliban leadership enjoys safe haven inside the country.

Observers in Pakistan fear the seminaries are breeding grounds for intolerance or even extremism, with repeated calls for more oversight. “The madrassas in Pakistan’s tribal grounds are factories of suicide bombers,” said Brian Williams, who conducted a CIA study on suicide terrorism in Afghanistan.

“Afghanistan has unsuccessfully tried closing down the pipeline for years. The children’s families often don’t know that their sons have been recruited… until they get payments promised to their dead sons.”

The insurgents say “boys with no beards” are never used in military operations, but Afghan authorities routinely report intercepting Taliban child bombers—some as young as six. Officials say children are used as “human missiles,” their tiny bodies a nimble conduit of flesh-searing explosives, able to penetrate layers of security. While their impressionable minds are easily manipulated to cherish death more than life.

Last month a 12-year-old would-be suicide bomber surrendered to Afghan forces in eastern Nangarhar province. The Taliban sent him to kill “infidel troops,” he told local media, but he had last-minute misgivings after seeing soldiers praying inside a mosque.

“The Taliban’s increasing use of children… only adds to the horrors of Afghanistan’s long conflict,” Human Rights Watch said in a recent report. “Children should be at school and at home with their parents, not exploited as cannon fodder for the insurgency.”

AFP tracked down Mohibullah’s family in a mud-walled house in Spin Boldak, a notorious town along the opium-smuggling route on the Pakistan border, who verified many of the personal details in his story. Quietly sobbing behind her veil, Mohibullah’s mother pleaded his innocence.

“He is scared of cats. How can he become a suicide bomber?” she insisted, adding that she can hardly afford to feed her six children let alone hire legal help. “When I met him in prison, I asked ‘why did you run away from home?’ He cried, hugged me and said ‘Take me home’.”

An education in a Pakistani madrassa is seen as a cultural rite of passage in Spin Boldak. Children are frequently known to run away to madrassas, crossing the semi-porous border.

“I miss Mohibullah dearly,” said his younger brother Ehsanullah, fondly recalling how he played with the wannabe boxer.

The words “zakhmi zada” (broken heart) are inscribed on the door of Mohibullah’s tiny prison cell, which he shares with nine other inmates. “You are teaching inmates dangerous things like karate,” Ahmadullah Sadat told Mohibullah playfully. “It’s boxing,” Mohibullah smiled diffidently, correcting the head of prison legal services. “You will become a great boxer when you get out,” Sadat said, allowing his smile to widen a little.

He is a Pakistani and should be brought back.