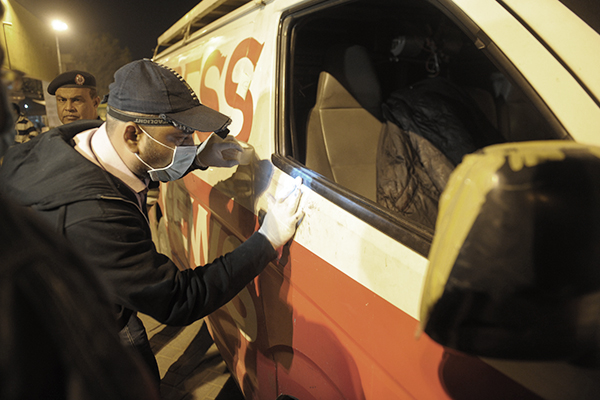 The time for pro forma condemnations and slogans is up.

[dropcap]T[/dropcap]o say that the Jan. 17 attack on an Express News van in Karachi and the gratuitous shooting and killing of the channel’s staff is dastardly and unacceptable would be to state the obvious. This was the third attack on the privately-owned media group. The first two were more like warning shots; this third—given the modus operandi, the number of 9-millimeter shots fired, and the reported use of silencers by the murderers—was a targeted attempt to kill.

Obvious also is the fact that the banned Tehreek-e-Taliban and its affiliated groups want to silence every dissenting voice. The method, again, is tried and tested. Ideologies get a core group. The rest are to be coerced into falling in line. This is where the obvious ends. Beyond this are questions and choices. Let’s consider them.

Express News’ reaction was threefold: They went on a marathon broadcast of what happened to them; they chose to speak with the so-called spokesperson of the terrorist franchise, offering coverage to their viewpoint if they spared the channel; and, lastly, they engaged representatives of the state, questioning them about the state’s capacity to provide security to its citizens.

Self-preservation forms the core of human existence. It is also the central aspect of any security policy. Modern states and societies create specialized forces for this function: managers and perpetrators of violence who kill and get killed to secure the majority. In other words, the selfish desire to preserve the self presupposes that either one has to kill himself or, at a collective level, a state will recruit and train people from within society who will perform that function, as and when necessary, for the overall security of its people.

State theorists agree that a state must have a monopoly on violence. But that monopoly comes with great responsibility, a quid pro quo central to collective life. People surrender their ability to generate violence, each against the other, so that the state can streamline social, political, and economic life. There is no concept of the state’s monopoly on violence without its ability to protect its people. Hobbes’ state of nature with its bellum omnium contra omnes (war of all against all) must give way to a legal state.

Express News’ decision to talk directly to the terrorists and attempt to strike a bargain for security is an expression of the fact that the state has failed in its core function, i.e., providing security to its citizens. It does not retain a monopoly on violence and cannot be the arbiter between the people. Losing that monopoly means, in theory, a return from the legal state to the state of nature where entities other than the state have not only acquired the capacity to generate violence but can do so at will.

This is not a new phenomenon and it hasn’t come about overnight. It has, however, now reached a point where the state, unless it wakes up to the corrosion of its authority, will cease to exist despite its many resources and its coercive apparatus.

The regression from the legal state to the state of nature will mean spheres of influence carved out between various groups that retain their power through brute force. Again, this is a phenomenon that we have been witnessing for many years—the ungoverned spaces whether they are found in the remote, craggy mountains of the tribal areas or the winding, dusty lanes of a metropolis like Karachi. In an ideal world, every time a state fails to apply its laws to any case that is cognizable, it surrenders its monopoly to an individual or a group. In reality, all states do that to some degree and for various reasons.

Yet, if the state has to survive, it must either negotiate successfully or use its coercive apparatus effectively. Either way, it must appear strong and come out of that crisis successfully. That requires will. The will requires concerted action. And concerted action requires serious policymaking. It is neither a function of apathy nor of pusillanimity.

Take a hard look at how this state has operated and you will see what I mean. States and societies have gone through worse and come out victorious. Why? Even when they took the worst hits, their will to survive and fight remained intact. Defeat is about losing one’s will to fight. That is where we stand. The enemy has resolve; we have doubts. The enemy has clear objectives; we are not even sure who the enemy is. The enemy has a dedicated leadership; we have charlatans. The enemy attacks us; we fight among ourselves and think that that is the best way to defeat the enemy.

What’s the way out?

The first is resolve. What value are we prepared to assign to the values that make us. But that is only the necessary condition. We also need a clear perspective on who the enemy is. Democracy is the best system, despite its flaws, but if this is an emergency and if democracy is giving us nothing but petty squabbles and constant bickering, then a state of emergency must be declared, not by a single person or a small coterie of people but by the nation. That is a paradox with a long legal history, what the Romans called iustitium, a state of exception brought about by law and where the absence of the normal functioning of law is denoted by law itself. (This is not the space to go into the details of that but I mention it as a pointer which requires some serious thought, not absolute, kneejerk reactions.) This may not come to pass. In which case, how do we handle the situation?

Let’s go back to Express News’ decision to bargain with the terrorists. They did it, as I said, because they feel the state has collapsed and they are on their own—even as they also engaged the state and asked tough questions.

Was that the right decision? Perhaps it was, perhaps it wasn’t. I shan’t offer a direct answer to that. But there’s another way of looking at the problem. Why have the terrorists decided to target the media? It is because they need the media. Their activities must be splashed or they will not have the impact, psychological and emotional, which is crucial to their design. Imagine a state where no one gets to know what terrorists are doing, or very few do; where acts of terrorism do not get splashed across the country and abroad. The impact will be reduced to those that have directly suffered. The spectacle will be gone. Terrorism is nothing without the spectacle. More innocent people died and were displaced by the earthquake in 2005 than have perished in 13 years of terrorism. Yet, the impact of the latter, of the spectacle of bodies slowly piling up, is far greater than what nature extracted in a matter of minutes.

That is where the media’s leverage lies. Instead of bargaining with terrorists, the media must use this leverage for safety. Doing so requires closing ranks. It is a shameful act that rival channels and newspapers are not even prepared to identify the channel that was attacked. Such divisions, when everyone is facing an existential threat, cannot just be ascribed to myopia and stupidity. If it were not so farcical and banal, I would call it the Greek tragedy where, Oedipus-like, gods destine someone to commit a sin.

If the media closed ranks and signaled to the terrorists that they will get no coverage, they would not need to bargain with these murderers. Again, that requires will. To use an analogy from nuclear strategy, there is a lot of space between quitting and maximum response. Thomas Schelling talked about brinksmanship, losing deliberate control to force the other side to accommodate. It’s about shared pain. The loss of one will also be the loss of the other. If terrorists start killing media people, they must run the risk of losing the spectacle on which they thrive. But as I said, this is not something an individual can do; nor can it be done by one media group. It must be a joint exercise. It must be signaled clearly and it must be done. Let the hurt be mutual.

That said, the state cannot be absolved of its responsibility. There are ways to handle this situation. They are not neat but they require developing cojones.

The state has to decide. Either it must do what it is damn well supposed to or it has to surrender its monopoly on violence to others who are still ensnared by the fantasy that they are living in a legal state. The state cannot expect some people to continue to die simply for being law-abiding citizens while bandits and terrorists roam and kill freely. People are not cowards; they become so when the state pushes them into a cul-de-sac and shares nothing with them. Give them a purpose, stop lying to them and they will be prepared to sacrifice until the war is won.

The choice is state’s. The time for pro forma condemnations and slogans is up. Not just that, the jig will be up—shortly.

“The key to defeating the enemy is to discern what his center of gravity is and then directing your energy, be it military or political, against this source of power”Clausewitz.