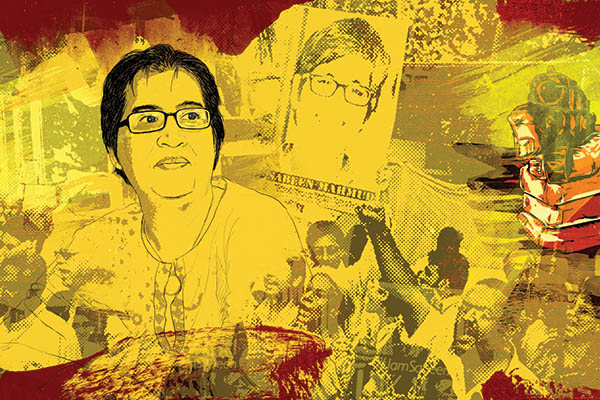 Sabeen Mahmud heard the smallest voices around her and made them her own.

Sabeen is in her mother’s arms, her gaze so intensely innocent that it comes across as a statement—the caption of this photo, taken when she was a baby and posted on Facebook last year, on what was to be her last birthday, reads: “wide-eyed and vulnerable; some things never change.” So wide-eyed and in love with the macrocosm that holds us all—its forces, its finesse, the teachable moments even in its failures—that I imagine her walking across the universe in awe and devotion, barefoot like a pilgrim; so vulnerable, she made a habit of listening for the smallest voices around her, making them her own.

This face of ineffable innocence captures the essence of the gutsy woman who brought about an irreversible change in the mindset of a generation living in a climate of lawlessness and intellectual and cultural deprivation; this is the child who refused to grow up, who rejected the system with an innate sensibility cultivated over time, who saw clearly through society’s falsehoods and threw tantrums against the divisive, lopsided power structures, ranted against the elitist models of education that solidified class strata rather than acting as equalizers, insisted on creating an inclusive environment against the tide of intolerance, the child whose heart remained as golden as her mind.

When we met as students at Kinnaird, Sabeen stood out as a nonconformist a notch above the rest of us who also fancied ourselves nonconformists. In a campus culture that thrived on debate and creative expression, with a sizeable number of outspoken women among the faculty who encouraged a fearless scrutiny of the status quo, many of us were engaged in challenging and dismantling accepted notions but few believed enough to go beyond words, to enact the change we dreamed of, and none took the risks quite like Sabeen because Sabeen wanted more than articulation. She wanted transformation.

And transform she did. Karachi, which had suffered one trauma after another in recent decades, was left with a corroded spirit, as was the rest of the country. With threadbare resources and in only a few years, Sabeen connected us back to civilization by bringing us that most necessary and human of all the arts: conversation. Her first and foremost commitment was to open dialogue, to create a milieu centered on the free exchange of ideas, as well as the cultural expressions, intellectual, technological and political avenues leading to a larger transformation: establishing the right to express dissent, to learn from and respect divergent views, and ultimately, to empower the everyday Pakistani.

Sabeen’s T2F has often been described as an “oasis,” a place where hope is nurtured against the prevailing chaos and despair—one lecture, one conversation, one cultural event at a time. So singular is this space, any analogy that comes to mind seems to be a tired one. When, on a visit to Pakistan a few years ago I was invited to give a poetry reading at T2F, I was overcome by how much it felt like walking into a dream, only better, because in dreams you cannot inhale the musk of books, paint murals with friends, and be enraptured by a Sufi qawwali or a viola concert, “bring your brain” to talks on everything from truck art to foreign policy to Shakespeare to cyber-crime law, engage in civic hackathons and flood-relief drives, take part in such revived traditions as street theater or “dastaangoi,” the classical Urdu art of storytelling.

A space that has gained international attention and is in step with modern times and conversant with the West, T2F is nonetheless rooted in Pakistan’s own long lost, powerful counterculture that Pak Tea House, that famous salon of writers, artists and agitators, originally embodied. With T2F, Sabeen reinvigorated what she considered to be the treasured legacy handed down to her. In her own words: “To our elders, the giants on whose shoulders we stand: you raised us to do the right thing, to rise up against injustice, to fight for what we believe in. You raised us on the poetry and music and literature of resistance and revolution. You raised us to roll up our sleeves and fight. And that is what we will do even when it isn’t ‘safe.’ I never want to hear my friends’ children say, ‘your generation failed us.’”

Civilization’s clock is always slow but ours was turned back due to the vicious circle of fear and ignorance, apathy and a detachment with human values. It takes centuries to shape a culture that will nourish, fortify and safeguard a people against tyrannies of all kinds. Sabeen accomplished the massive task of setting our clock in motion again.

Sabeen’s murder has stunned us all. From the overwhelming number of heartfelt, clearly voiced tributes around the world, it is apparent that the movement she started will only gain momentum, that tragic and untimely as her death is, the exquisite “dent” she so passionately wanted to make in order to coax out our bond with each other, with our heritage and a shared future, against the tyranny of silencing, has been made.

With a fierce mind governed by love and a great measure of innocence, she taught us how to work, how to play, to imagine and invent, collaborate, protest, and most of all to not be afraid. Gritty and “dil phaink,” she loved her country despite the heartbreaks and gave it her all.

An exquisite and heartfelt tribute.