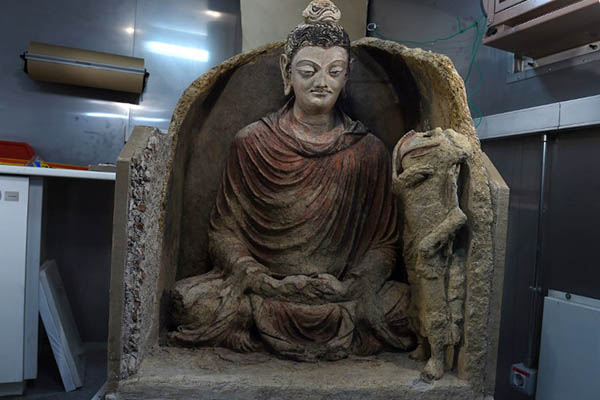 Statue was discovered in Logar province in 2012 and was removed from site to better protect it.

Having withstood time, the elements, looters and war, a spectacular Buddha restored and removed from one of Afghanistan’s most dangerous regions is to make its public debut in the country’s national museum.

The statue, which depicts the sage in a purple shroud offering his hands to the heavens, had been hidden beneath layers of soil and silt since some time between the third and fifth centuries, according to the archeologists who discovered it. The exceptionally well-preserved piece, with its colors still vibrant, was found in 2012 at the Mes Aynak site about 40 kilometers southeast of Kabul, in the now Taliban-infested Logar province. Its discovery was made possible after a Chinese consortium began digging a massive copper mine that uncovered an ancient monastery complex stretching out over an area of four square kilometers.

“The statue was almost whole when it was discovered, with its head present, which is rare,” said Ermano Carbonara, an Italian restoration expert. “It was placed in the center of a niche, which itself had been decorated with painted flowers, in the heart of a great center of [an area used for] prayer. It was better to remove it from the site to protect it,” he added.

The clay used in the sculpture was taken from the Mes Aynak river and is particularly sensitive to moisture. “A night of rain could destroy it,” said Carbonara, adding the details of the face, the black curls of the Buddha’s bun, its pink cheeks and deep blue eyes pointed to a “truly sophisticated technique” of craftsmanship.

A lust for looting in a country wracked by anarchy for the past four decades left Carbonara with little choice: the Buddha’s head, its most valued part on the black market, had already rolled to the ground—either the result of an unfortunate strike of an excavator’s spade, or the first attempt at plundering. “We find plenty of headless statues. If we’d left it be, its head wouldn’t have lasted a long time,” said Julio Bendezu, director of DAFA, the French government archaeological mission in Afghanistan.

Once in Kabul, a team of Italian, French and Afghan workers re-attached the head and placed the Buddha back in the recess, along with one of two accompanying characters, who appear to be either monks or patrons. The second is already in the museum and will also be returned to its original place. “Often, those who financed the construction of the statue and its housing wanted themselves represented by its side,” explained Bendezu.

The restoration also allowed experts to study the statue’s inner structure of straw and wood, revealing a Greek influence brought by Alexander the Great when his armies swept through the region around 330 B.C. The Buddha left DAFA’s workshops earlier this week under military escort and was brought to the National Museum of Afghanistan in preparation for its public unveiling.

A vast room has been dedicated to the excavation and treasures of Mes Aynak, testifying to the pre-Islamic past of Afghanistan.