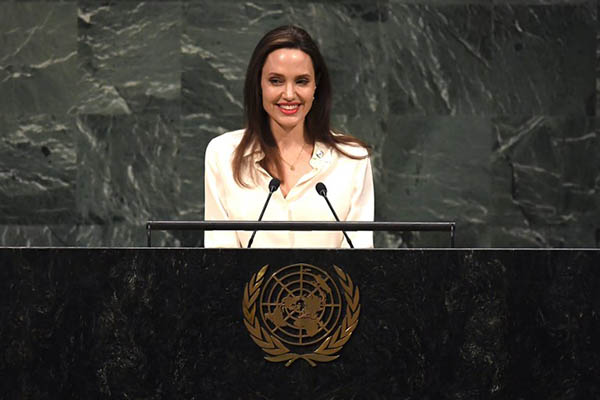 Actor and U.N. special envoy says risk of conflict can only be reduced if countries work together ‘on equal footing’

Describing herself as an American patriot, Angelina Jolie spoke out on Friday in favor of U.S. engagement in the world, in an address at the United Nations that contrasted with President Donald Trump’s views.

The A-List actress and U.N. special envoy for refugees delivered the keynote address at a conference to raise support for U.N. peacekeeping missions at a time when the United States is seeking major budget cuts to the blue helmet operations.

“I’m a patriot. I love my country and I want to see it thrive,” Jolie told the gathering at the General Assembly. “I also believe in an America that is part of an international community. Countries working together on equal footing is how we reduce the risk of conflict. It is how we avoid the need to send men and women of our militaries to fight and sacrifice overseas.”

The United Nations was set up to find ways of resolving differences peacefully and “it is all in our interest for the U.N. to be made effective, brought closer to the lives of citizens, and not ever misused,” she added.

Jolie’s praise for the United Nations stood in contrast with the disdain U.S. President Donald Trump’s administration has shown the world body.

Trump has cut U.S. funding to the United Nations and his national security adviser John Bolton, a former U.N. ambassador, once remarked that if the U.N.’s 38-floor building “lost 10 stories, it wouldn’t make a bit of difference.”

Jolie, who has traveled to refugee camps worldwide, said that peacekeeping missions “often represent the last and only hope for millions of people facing daily threats to their safety and their basic rights.” The award-winning actress made an appeal for increasing the number of women peacekeepers in U.N. missions.