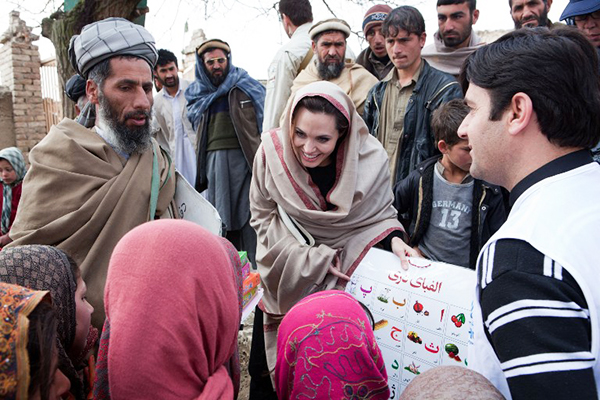 The world’s most powerful actress is changing lives in Afghanistan.

At a school in a bombed-out Afghan village near Kabul, Angelina Jolie is known as an aid worker or engineer—never as one of the world’s most famous film stars.

Jolie, a special envoy of the U.N. High Commissioner for Refugees, built the school in Qala-i-Gudar last year and is planning to open more in Afghanistan with profits from a newly-launched jewelry line that she has designed.

The Hollywood star visited Qala-i-Gudar in 2011, and she retains an avid fan base among residents who have never seen any of her films and have no idea about her global fame as an actress. Acting is controversial in the country, with many conservative Afghans associating it with un-Islamic behavior, even prostitution.

Homaira, aged 13, is one of 250 pupils at the all-girls school who has benefited from the new facilities, which opened for their first full academic year last month. “We used to study in the backyard of the mosque, it was hard,” she said. “Now we are so happy to have a school. It’s a beautiful place.” Asked who built her school, Homaira smiled and answered: “the beautiful American lady.”

The two-story building, 30 kilometers north of Kabul, has large windows and neat rows of desks. On the outside, which is painted light blue, is a plaque proudly boasting of its founder. “Through the generous contribution of Angelina Jolie, UNHCR Special Envoy,” it reads.

Even headmaster Gul Rahman Ayaz appeared ignorant of Jolie’s superstar celebrity, apparently believing she was a senior UNHCR official. “Is she?” Ayaz asked doubtfully after learning Jolie was an actress. “Well whatever, she is a great woman, very kind woman,” he added with a smile.

Ayaz recalled Jolie visiting the mosque’s open backyard, which at the time served as a classroom, and sitting cross-legged with villagers discussing her plan to found a modern school. “She was very humble. She sat on dust. She didn’t behave like a movie star,” Ayaz said, remembering Jolie arrived in a U.N.-marked vehicle and wore a modest black outfit and brown headscarf.

Sabera, the school’s only female teacher, believed Jolie was a reconstruction expert sent to build schools in Afghanistan as it struggles to emerge from decades of war that left the village in ruins. “I thought she was an engineer,” said Sabera, 30, who uses only one name. “I have never seen her movies but I hope she comes back.”

Under the hardline Taliban, who ruled Afghanistan between 1996 and 2001, cinema was banned and girls were prohibited from attending school. Qala-i-Gudar was on the frontline in fighting between the Taliban regime in Kabul and Northern Alliance forces. Today Afghans have a huge appetite for cinema, though they prefer the melodrama and music of Bollywood fare to U.S. blockbusters.

Officials say millions of children, about 40 percent of them girls, have returned to school—one of the key achievements of the billion-dollar international aid effort since the 2001 U.S.-led invasion brought down the Taliban.

But, according to Kabir Haqmal, head of public affairs at the education ministry, half of the 10.5 million students still study in the open air or in tents, and 50 percent of about 200,000 teachers are unqualified. “Anyone investing in Afghanistan’s education is investing in the future of Afghanistan,” said Haqmal. “I know this school was built by Angelina Jolie and we appreciate her work.”

Oscar winner Jolie, partner of actor Brad Pitt and star of the Lara Croft movies, has a long record of humanitarian work and told the E! News website that she hopes to fund more schools from the proceeds of her new jewelry line called “Style of Jolie.”

In Qala-i-Gudar, as in much of rural Afghanistan, there is little access to television. Out of a dozen girls we interviewed, half don’t have a set at home. Another has one, but says “the aerial has been broken for a year.”