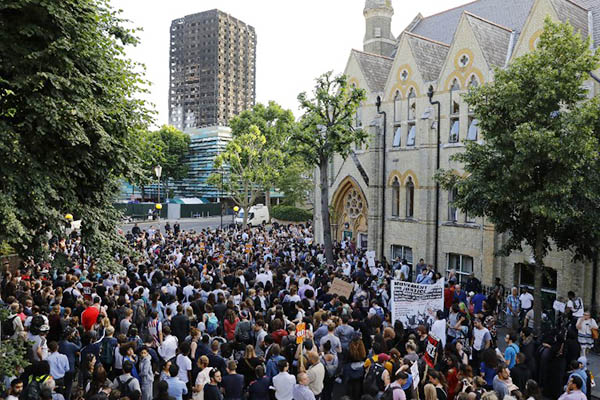 Angry London residents heckled Prime Minister Theresa May and stormed local authority headquarters on Friday as they demanded justice for the victims of a tower block fire that left 30 people dead, with dozens more unaccounted for.

May was criticized for avoiding locals when she visited the burnt-out shell of the 24-storey Grenfell Tower on Thursday, but faced cries of “shame on you” and “coward” when she returned the following day.

Dozens of police officers held back booing crowds and broke up scuffles as her car drove off from a local church, where she had met survivors, residents and volunteers and promised new funds for those affected. There were also angry scenes outside the offices of the Kensington and Chelsea council, which was responsible for managing the 1970s social housing block, in a working-class enclave in one of London’s richest areas.

There are questions about why the block was not fitted with sprinklers or a central smoke alarm, and whether a recent refurbishment, including new external cladding, helped fuel the flames. “It was a death trap and they knew it,” one person shouted as demonstrators swelled outside the council building, with dozens going inside and clashing with police and security guards. “I have friends in the tower and they are not telling us anything,” said Salwa Buamani, 25, who took part in the peaceful protest outside with her three-year-old niece.

Protesters later marched to the edge of the police cordon around the tower, shouting “no justice, no peace,” where a few young men tried unsuccessfully to break through. Another demonstration took place outside May’s Downing Street office, while later in the evening, hundreds of mourners gathered near the tower for a candlelight vigil.

The death toll rose to 30 on Friday but authorities warned it would increase further, as fire crews picked their way through the wreckage of the blaze in the early hours of Wednesday morning. May has announced a judge-led inquiry into what happened, and on Friday promised £5 million for emergency supplies, food and clothing. But accusations of a slow official response have heaped pressure on the premier, whose Conservative government remains in limbo after losing its parliamentary majority in last week’s election.

In an interview with the BBC late Friday, May insisted she was “deeply affected” by the “horrifying” stories of survivors, and repeated that she was determined to help. She promised residents would be rehoused within three weeks, and rejected accusations that the government failed to act on recommendations to tighten fire regulations after a fatal block fire in London in 2009.

Queen Elizabeth II and her grandson Prince William visited a community center on Friday where some of the survivors are being housed, and where volunteers have been inundated with donations of clothes and food.

The area surrounding the tower has been plastered by desperate relatives with pictures of the missing, from grandparents to young children. Police have said the recovery process could take weeks, and warned some of the bodies might be too badly burned to be identified.

Firefighters were using drones and sniffer dogs to search the blackened tower, as some of the upper floors have not yet been made safe.

More than 70 people reportedly remain unaccounted for, and many of those protesting on Friday were demanding the return of their loved ones’ remains. “We are not stupid, we’re aware people are dead. Just tell them!” said local resident Karen Brown, 36.

Twenty-four injured survivors are still being treated, 12 of them in critical care.

The fire forced residents to flee through black smoke down the single stairwell, jump out of windows or even drop their children from the building. One of the victims was Mohammed Alhajali, a 23-year-old Syrian refugee who came to Britain in 2014 with his brother and was studying civil engineering.

A second victim named Friday was Khadija Saye, a 24-year-old photographer who had exhibited at the Venice Biennale.

The government has ordered inspections of similar buildings, and May said it was doing “everything in our power” to ensure people living in an estimated 4,000 other tower blocks across Britain were safe.

Questions are growing about how the Grenfell Tower fire spread so quickly, focused on the cladding fitted to external walls as part of an £8.7 million refit completed last year. The cladding—to beautify and insulate the building—had a plastic core and was similar to that used by high-rise buildings in France, the United Arab Emirates and Australia, which had also suffered fires that spread.

The Times newspaper reported that the company that manufactured the cladding also made fire-resistant models that cost fractionally more than the standard version.