Anger Grows in Parachinar After Three Attacks in Six Months 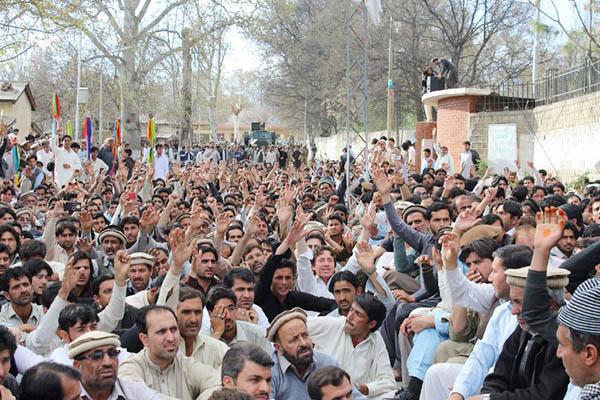 Protesters take to streets to demonstrate against ongoing militancy

Shia Muslims in Pakistan’s restive northwest protested on Monday as the death toll from twin blasts three days earlier rose to 69, marking a grisly Eid for the town worst hit by militancy so far in 2017.

Dozens of protesters offered their Eid prayers wearing black armbands in the market in Parachinar, where the bombs tore through crowds of shoppers on Friday, local officials said. “The death toll from Friday’s blasts has reached 69,” local administration official Basir Khan Wazir told AFP. He said the local administration was trying to negotiate with the protestors.

Parachinar, capital of Kurram district, a mainly Shia area of Pakistan’s tribal belt, had already suffered two deadly bomb blasts in its markets this year. It was the site of the first major attack in the country in 2017 when a bomb killed 24 people in January, an attack claimed by the Pakistani Taliban. In March, a second Taliban attack in another market killed a further 22 people.

Friday’s assault brought the town’s loss of life due to extremist attacks up to 115, more than any one city in Pakistan has suffered so far this year. It was claimed by a little known group believed to be linked to Lashkar-e-Janghvi, one of Pakistan’s bloodiest sectarian outfits.

Kurram, one of Pakistan’s seven semi-autonomous tribal districts, is known for sectarian clashes between Sunnis and Shias, who make up roughly 20 percent of Pakistan’s population of 200 million. “We have been a constant target of the Taliban but the government has always failed us,” Muzamil Hussain, a Shia activists from Parachinar told AFP on Friday.

Authorities have said that after the first two attacks checkposts and barriers were set up around the city’s markets. Hussain said that suggested Friday’s attackers had insider help. “I don’t understand how can someone drive a bomb-laden vehicle through all the checkposts of the military and other paramilitary troops and reach here, it simply isn’t logical, and this is what we are protesting against,” he said. “We are demanding the government end supporting militant groups,” he added.

Pakistan has long had a policy of offering covert support to militant groups it believes can further its own ends, particularly in the disputed Himalayan region of Kashmir. Shias in other parts of the country also wore black bands in solidarity with those grieving in Parachinar, the Majlis Wahdat-e-Muslimeen Pakistan Shia political party said in a statement.

The Parachinar blasts were the deadliest in a series of militant attacks across Pakistan on Friday, which killed a total of 77 people, unnerving citizens ahead of Eid, one of Islam’s holiest festivals which closes the fasting month of Ramzan.