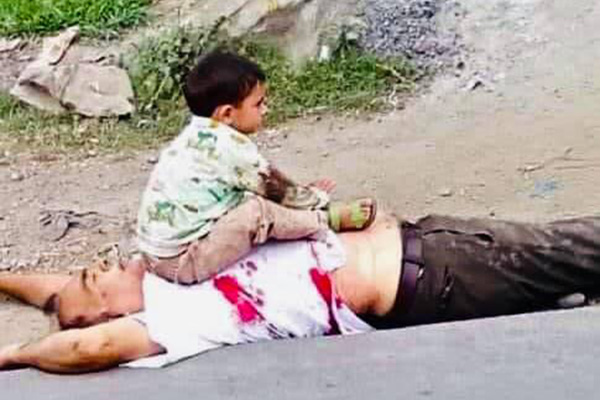 His three-year-old grandson sits atop the body of 65-year-old Bashir Ahmed Khan, whose family claims he was killed by Indian forces. Twitter

Victim’s family accuses police of killing him, who claim he was killed in shootout between rebels and security forces

A picture of a three-year-old Kashmiri boy sitting on his grandfather’s body in Sopore town of India-held Kashmir has gone viral, stirring anger among a populace that often accuses security forces of human rights abuses in the Muslim-majority region.

Victim Bashir Ahmed Khan, 65, was allegedly shot dead while he had gone to market with his grandson to get some milk. “My brother was not a militant. He did not carry a gun. Why was he killed?” Nazir Ahmad, the victim’s brother, asked of Al Jazeera. “If you want, I can come with you to meet the top police officers to counter their claims,” he added.

The police have claimed the victim was gunned down during a shootout between rebels and security forces. Vijay Kumar, the inspector-general of police in India-held Kashmir, claimed to reporters that rebels had opened fire on security forces from a mosque in the region, resulting in a gunfight that also caused the death of one security official and injured three others. He accused the family of acting under the “pressure” of militants to blame the incident on security forces.

However, the family refuses to budge from its allegations, with the victim’s son claiming that if the police’s statement were true then his father’s body would’ve been in his car, not outside on the ground. Aijaz Ahmad Qudsi, Khan’s nephew, told Anadolu Agency that the car didn’t have a single scratch, which would be the case if it had been caught in the middle of a gun battle.

The family has even accused security forces of placing the child on the civilian’s body “to take pictures.” They have alleged that the child’s clothes were drenched in his grandfather’s blood and he was inconsolable for hours after the incident.

The picture of the child swiftly went viral on social media and was picked up by mainstream outlets. Hundreds took to the streets in India-held Kashmir to protest the killing, with the man’s funeral near Srinagar echoing with calls for “freedom” from Indian rule.

President Dr. Arif Alvi on Thursday urged the global community to take notice of the “merciless killing” of an elderly Kashmiri civilian by Indian forces. In a statement, he said Indian P.M. Narendra Modi’s fascist government was killing innocent civilians, even if all they did was raise slogans for liberation of Kashmir.

Similarly, Foreign Minister Shah Mahmood Qureshi said that the cold-blooded murder of a grandfather in front of his grandchild proved Indian forces had achieved new peaks of barbarity and oppression. In a statement, he said the incident was merely the latest in an ever-growing list of extrajudicial killings in the valley, adding that the European Union has been informed of the situation. Urging it to take immediate notice of the incident, he reiterated Pakistan’s resolve to raise its voice on atrocities in India-held Kashmir at every forum.

Since January, at least 229 people have been killed in more than 100 military operations across India-held Kashmir, including 32 civilians, 54 government forces and 143 rebels, according to rights group Coalition of Civil Society.