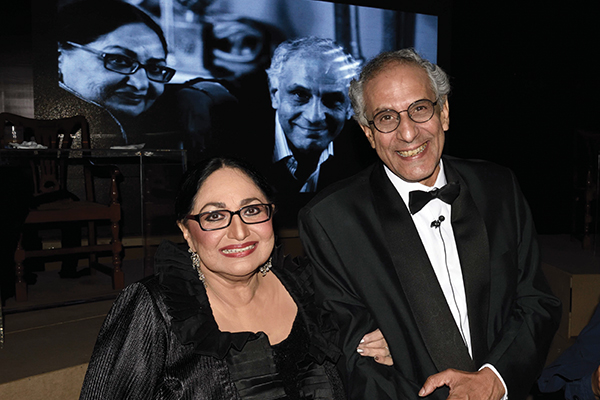 Over two decades ago, in 1990, A. R. Gurney’s play Love Letters was a finalist for the Pulitzer Prize for drama. The enduring quality and universality of his timeless script has kept the show running all these years, in various iterations and languages.

The play has been translated into French, Russian, and Chinese. The 1992 Urdu version, Tumhari Amrita, was adapted by playwright Javed Siddiqui, directed by Feroze Abbas Khan, and starred Shabana Azmi and Farooq Sheikh. This production saw many revivals and toured Pakistan in 2016. Around the same time, Gurney’s original English version was also performed, to critical acclaim, by Rehana Saigol and Imran Aslam under the able direction of Hameed Haroon. This year, the trio put on a new version of the play, dedicated to Haroon’s late mother and which premiered to packed crowds in February at the Lahore Literary Festival (LLF) and earlier this month at the Mohatta Palace. The three-day run in Karachi was sold out.

Love Letters revolves around two American protagonists, Andrew “Andy” Makepiece Ladd III and Melissa Gardner, who sit at their respective desks and read out the letters they have written to each over 50 years. As such, the focus of the play, its action, trajectory and nuances are centered entirely on their written words—which suggest an inner life different from the spoken words they have exchanged. At one point, the young Melissa writes to Andy complaining about the difference between how he is in person and how he comes across in writing. He explains how important the letters, and the process of writing, are to him as means of self-expression: a unique, unencumbered space where he can be himself.

As their lives start to assume different directions, the play highlights the pressures of traditional gender roles—where a man’s life is meant to revolve around his career and a woman’s sole aim is marriage.

The 2016 production introduced a new feature: stunning black and white photographs by Arif Mahmood which were shown at judicious intervals portraying the two protagonists together at different points in time. This innovation extended Gurney’s original concept beyond the period, culture and society in which it is set: his play begins in the 1930s, when Andy and Melissa first meet as children, and looks at the privileged lives of the American elite. Mahmood’s photographs, of Saigol and Aslam and those who provide a likeness to their younger selves in the 1960s, capture the lifestyle of Pakistan’s privileged elite, with their private schools, dogs, travel, trendy clothes and accessories, spacious homes, Western pop.

In Pakistan, we have a tradition of translating famous plays into Urdu. I have often wondered why our English-language productions of certain plays, which have clear echoes to our own society, are not performed in local dress with local resonances. In that way the original English assumes an interesting, relevant duality which cuts across cultures, societies and time. In Haroon’s Love Letters, the inclusion of photographs helps achieve precisely this metaphorically, as did the fact that these snapshots were accompanied by well-known American songs which similarly captured the changing moods of the play.

Saigol as Melissa and Aslam as Andy had big shoes to refill. (Melissa has been played by Elizabeth Taylor and Colleen Dewhurst, Andy by Charlton Heston and James Earl Jones.) Both played their roles with ease and panache, skillfully changing their voices, intonations and emotional pitch as Melissa and Andy go from childhood to adulthood to old age.

The love that grows and develops between them is also beset with misunderstandings and missed opportunities. The play also highlights the family backgrounds that shape them. Both are born into great privilege. The intelligent Andy, with his solid, caring parents has to live up to their ambitions for him. Melissa, the wealthier of the two, belongs to a deeply dysfunctional family. She is shipped off to various boarding schools where she is thoroughly miserable and rebels. She hates her stepfather and rejoices in her mother’s divorce from him, revealing in a small, telling moment en passant that her stepfather had been a sexual threat to her. Her visit to her father and stepmother leave her alienated from them, too.

Saigol and Aslam’s performances bring out the lifelong rapport between Melissa and Andy despite their vastly different personalities. She is impulsive, volatile, and disturbed; he is quiet, confident, and self-contained. Both are well-traveled but his world grows while he serves in the Navy during World War II and comes in contact with different cultures. He falls in love with a Japanese lady, but in a regular case of “bad timing”—a theme which runs through the play—this romance comes to an end, shortly after Melissa has given up on Andy and married someone else.

The manner in which Saigol and Aslam portray the aging Melissa and Andy provides some of the finest acting in the play. Saigol captures all the sadness and tragedy of Melissa’s life, as her marriage collapses, her children become estranged from her and she develops into a depressive and alcoholic, like her mother. Aslam admirably conveys Andy growing into a successful public career, as a lawyer and senator and accommodating a less successful, if pragmatic, marriage. In these unlikely circumstances both find their passion for each other undimmed—although it finds expression largely through their correspondence, their love letters.