Annapolis Suspect Wanted to ‘Kill as Many as Possible’ 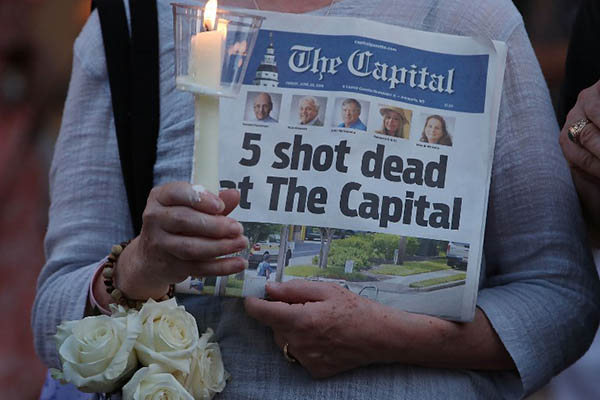 The gunman who carried out a deadly assault on a newspaper office in Annapolis, Maryland had barricaded a back door in an effort to “kill as many people as he could kill,” police said on Friday.

District court judge Thomas Pryal on Friday ordered the suspect, who has been charged with five counts of first-degree murder, held without bail, Anne Arundel prosecutor Wes Adams said in a separate briefing.

Adams said the judge’s decision was based partly on “evidence that suggested a coordinated attack: the barricading of a back door and the use of a tactical approach in hunting down and shooting the innocent victims.”

Police have identified the suspect as 38-year-old Jarrod Ramos of the Washington suburb of Laurel, Maryland, a man said to have a long-standing grudge against the Annapolis Capital Gazette over an article about his alleged harassment of a local woman.

During Friday’s briefing Altomare refused to mention the suspect’s name , saying, “He doesn’t deserve us to talk about him one more second.” But he confirmed that the man—who police say acted alone—was identified using facial recognition technology and other techniques.

Altomare was asked why the Capital Gazette had not pursued criminal charges after the suspect made online threats in 2013. “There was a fear that doing so would exasperate an already flammable situation,” he said.