‘Annihilation’ is the Sci-Fi Movie Women Have Been Waiting For 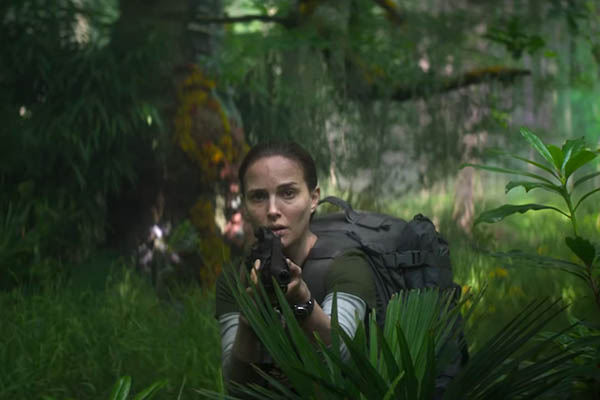 Sci-fi blockbuster Annihilation has been praised for its stunning, ethereal look but it is a relatively banal image that marks it out as unusual: its all-female cast, marching into danger together.

While female-led comedies like Mean Girls, Bridesmaids and Pitch Perfect are 10 a penny, an ensemble made entirely of capable, brave and smart women in an action movie is pretty much unprecedented.

In Annihilation, men need not apply as a group of female scientists is recruited for a mission into “Area X,” a sinister and mysterious portion of the U.S. coastline surrounding a top-secret alien crash site.

Natalie Portman plays a biologist and former soldier who joins the expedition to find out what happened to her husband, a special forces operative mortally wounded while investigating the phenomenon. “It’s just unheard of—you never get the opportunity to work with incredible roles for five women,” Oscar-winner Portman told reporters on the red carpet at the world premiere in Los Angeles on Tuesday.

“I mean it’s rare to find one, and to find five together and to get the opportunity to work alongside my sisters and spend that time together, and watch each other and learn from each other… is just remarkable.”

From British writer and director Alex Garland (Ex Machina, 28 Days Later), Annihilation is based on the acclaimed Southern Reach Trilogy by Jeff VanderMeer. Garland’s camera follows the women as they discover a beautiful but deadly world of mutated landscapes and creatures—dubbed “The Shimmer”—that threatens their sanity.

Set in lush, Florida marshland, the production recreated the subtropical environment in Britain with Windsor Great Park, once a private hunting ground for the royal family, as the swampy backdrop.

The 36-year-old Portman (Black Swan, Jackie) said one of the aspects of filming she most valued was downtime spent with her co-stars. “Between takes, we would all sit in the tent together and have fun just talking and telling funny stories. That, to me, will always be the movie—the five of us in a tent together, just messing around,” she said.

Portman’s husband is played by Oscar Isaac, 38, who worked with Garland on the acclaimed 2015 sci-fi thriller Ex Machina.

The actor has seen his stock rise sharply through his starring role in the new Star Wars trilogy, but finds himself taking a back seat here, lying unconscious in a hospital bed for much of the movie.

“Usually, you see a group of guys going in somewhere and have one female character, and this time the roles were reversed and I got to be the damsel in distress, and that was fun,” he laughed.

Thompson, 34, pointed out that the three top-grossing films in North America last year—Star Wars: The Last Jedi, Beauty and the Beast and Wonder Woman—were all anchored by female protagonists. Leaving aside two Star Wars movies—The Force Awakens and Rogue One—such movies were few and far between in the preceding years and Thompson welcomed the apparent sign of progress.

“I feel tremendously proud, and in the course of it I’ve gotten to know these four incredible actors who happen to be women, artists, mothers, directors,” she said. “They are just phenomenal people so I’m so proud to get to call them friends now.”

In the febrile atmosphere following Hollywood’s sexual harassment and gender pay gap scandals, even a movie with an all-female lead cast including an African American and a Latina is not above censure. Accordingly, Annihilation has come under fire for “whitewashing” after it emerged that the roles played by Portman and Leigh were written for women of Asian and Native American heritage in the original books.

The criticism comes despite a support cast that includes Japanese-born British actress Sonoya Mizuno and Britain’s Benedict Wong, whose parents are from Hong Kong.

The movie hits U.S. theaters on Feb. 23 but, unusually, Paramount sold the international distribution rights—save for China and Canada—to Netflix, a move seen as an admission that the studio doesn’t think it will sell overseas.

The decision came after poor test-screening results last summer that indicated the film might be “too intellectual” for the public at large, according to The Hollywood Reporter.

Early reactions to the movie fly in the face of this assessment, with critics describing it as “transfixing,” “beautiful” and a “new sci-fi classic.”

“This is the type of sci-fi we always say we want to see,” tweeted Ben Pearson, a senior writer at the Slash Film website. “Bold, challenging, singular, visually dazzling. Would not be the least bit surprised to see it hailed as a masterpiece [and it might actually be one].”