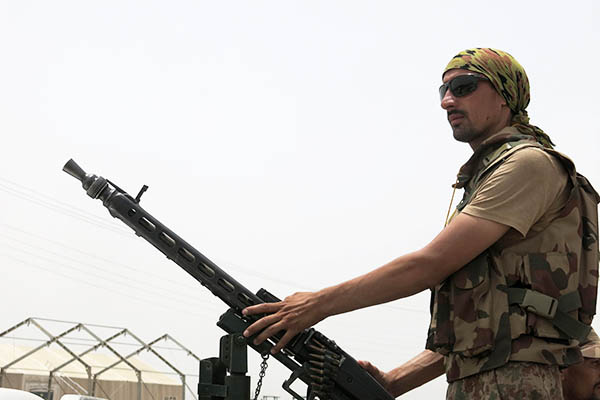 Locals claim all terrorists have fled the tribal area and sought refuge in neighboring districts.

The strikes were carried out at Degan village, a stronghold of Taliban militants in the North Waziristan tribal district. “Seven terrorist hideouts were destroyed and 13 terrorists were killed, including foreigners, by jet aircraft strikes in Degan in North Waziristan Agency today,” a military statement said.

However, local sources claimed that while the bombardment had taken place, there was no evidence that any militants had been killed. “To my information, the last local terrorist to flee North Waziristan, Tehreek-e-Taliban Pakistan spokesman Shahidullah Shahid, left a week before the military operation started for refuge in Orakzai Agency,” said a local tribesman on condition of anonymity. “Over 6,000 armed Uzbeks and other foreigners also fled for Afghanistan shortly after the military operation began,” another tribesman added.

More than 800,000 civilians have fled the long-awaited offensive unleashed by the military on the tribal area last month, according to the FATA Disaster Management Authority.

The military has vowed to wipe out the strongholds which insurgents have used to mount countless deadly attacks in recent years. So far 399 militants and 20 soldiers have been killed in the offensive, according to the military. The area is off-limits to journalists and the number and identity of the dead is impossible to verify.

The rugged mountainous area has been a hideout for years for Islamist militants of all stripes, including Al Qaeda and the homegrown Tehreek-e-Taliban Pakistan as well as foreign fighters including Uzbeks and Uighurs.

If the Taliban have all left, then who has killed the 20 troops and who is still sniping and laying IED ambushes?

Secondly, let the Taliban leave. The goal of this operation is to deny space to the TTP in Waziristan. The sooner the Army occupies the area and puts up cantonments, the better it will be for locals and schools, roads and hospitals will find their way in all the while denying the space to outside militants.