Another 72-Hour Truce Begins in Gaza 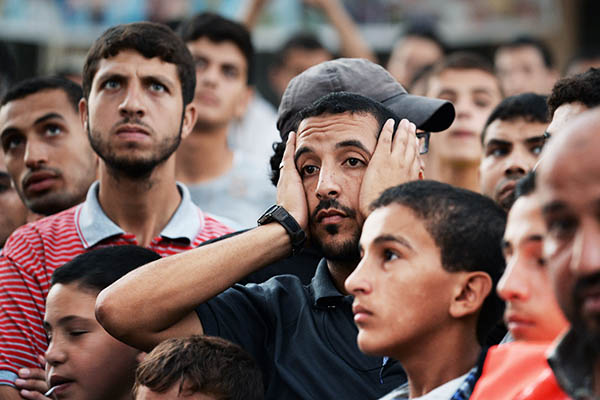 A fresh 72-hour ceasefire between Israel and Hamas came into effect in Gaza on Monday, paving the way for talks in Egypt aimed at a durable end to a month-long conflict that has wreaked devastating bloodshed.

The agreement, which began at 12:01 a.m. on Sunday, clinched days of frantic mediation to stem a firestorm of violence that has killed 1,939 Palestinians and 67 on the Israeli side since July 8. Minutes before the truce began, Hamas’s armed wing claimed it fired “several” rockets at Israel, including one at Tel Aviv. There were no immediate reports of any damage.

Egypt urged Israel and the Palestinians to use the new truce to “reach a comprehensive and permanent ceasefire,” after an earlier three-day truce collapsed on Friday. U.N. Secretary-General Ban Ki-moon also said he hoped it would give the two sides “another chance to agree on a durable ceasefire for the benefit of all civilian populations and as a starting point to address the underlying grievances on both sides,” a statement from his spokesman said. “The United Nations stands ready to assist in the implementation of an agreement that would consolidate peace and allow for much needed reconstruction and development of Gaza,” the statement added.

The ceasefire must lead to the lifting by Israel of its blockade of the Gaza Strip, Hamas chief Khaled Meshaal told AFP in Doha on Sunday. “We insist on this goal,” he said. “In the case of Israeli procrastination or continued aggression, Hamas is ready with other Palestinian factions to resist on the ground and politically,” he added.

Veteran Palestinian negotiator Saeb Erakat arrived in Cairo Sunday night for talks with Egyptian and Arab League officials on behalf of Palestinian president Mahmud Abbas, an airport official said. Israel said its team would only return to Cairo once the truce went into force. “If there is a full ceasefire on the ground the Israeli delegation will arrive in Egypt tomorrow,” an Israeli government official said Sunday night.

Palestinian delegates in Cairo told reporters that they were happy for the Palestinian Authority, headed by president Mahmud Abbas, to take over the reconstruction of Gaza and execute any agreement reached. Israel refuses to deal with Hamas, branding it a terrorist organization.

“The national unity government and the Palestinian Authority will take over the execution of all that will be agreed upon during the truce talks,” Azzam al-Ahmed, head of the Palestinian delegation, told reporters. “We are backing the setting up of a national body to be formed by president Abbas, which will take over the reconstruction [of Gaza],” said senior Hamas official Ezzat al-Rishq. “The president of the body should be professional, credible and one who will be accepted internationally.”

Seven Gazans, including a woman and two 17-year-olds, were killed on the eve of the truce in a barrage of Israeli airstrikes, and another 10 bodies were pulled from the rubble of previous strikes east of Gaza City, local medics said.

Hamas had refused to extend the 72-hour lull when it expired on Friday, and Israel accused the Islamist faction of breaching the agreement in its final hours with rocket attacks. In the gap between ceasefires, warplanes hit more than 170 targets, killing at least 19 people, while Hamas fired at least 136 rockets at Israel, of which 93 hit and 13 were shot down, with the rest falling short inside Gaza, the army said.

The U.N. says just under three quarters of those killed in Gaza were civilians. Around a third of the civilian victims were children. In Deir al-Balah, angry young men bellowed slogans as they carried the bloodied body of a 17-year-old to its grave. The Israeli army described the youth as a “prominent terror operative.”

“God loves martyrs! We will march on Jerusalem in our millions,” chanted mourners.

Israel said it closed its Kerem Shalom crossing used to truck supplies into the southern Gaza Strip after it was struck twice by rocket fire. “Israel will not engage in negotiations under fire,” Prime Minister Benjamin Netanyahu told his cabinet on Sunday, warning the operation would not stop until there was a prolonged quiet.

In the West Bank, an 11-year-old Palestinian boy was shot dead by Israeli troops as he played outside his home in Al-Fawwar refugee camp near the southern city of Hebron, relatives and medics said. The army said troops had opened fire during a “violent riot,” but it has opened an investigation into the circumstances of the shooting. The resumption of fighting had put Netanyahu under increased pressure from hardliners to send ground troops back in to Gaza to topple Hamas.