Another Deadly Day in Pakistan

Pakistan on Tuesday reported 111 new deaths due to the novel coronavirus, another dramatic spike, increasing to 2,839 the total casualties caused by the disease thus far.

In the 24 hours preceding 8:30 a.m., Tuesday, the country recorded 4,443 new infections, against 25,015 tests, raising to 148,921 the confirmed cases of coronavirus nationwide. At the same time, 2,669 patients tested negative, increasing recoveries to 56,390. There are currently 89,629 active cases of COVID-19 in the country, with the National Command and Operation Center reporting 3,515 of them are in critical condition.

Prime Minister Imran Khan on Monday chaired a meeting in Islamabad to review the prevailing coronavirus pandemic, saying the provinces had been issued directions for smart lockdowns in viral hotspots. He urged provincial authorities to keep ground realities in view so a balance could be achieved between precautionary measures and economic activities. 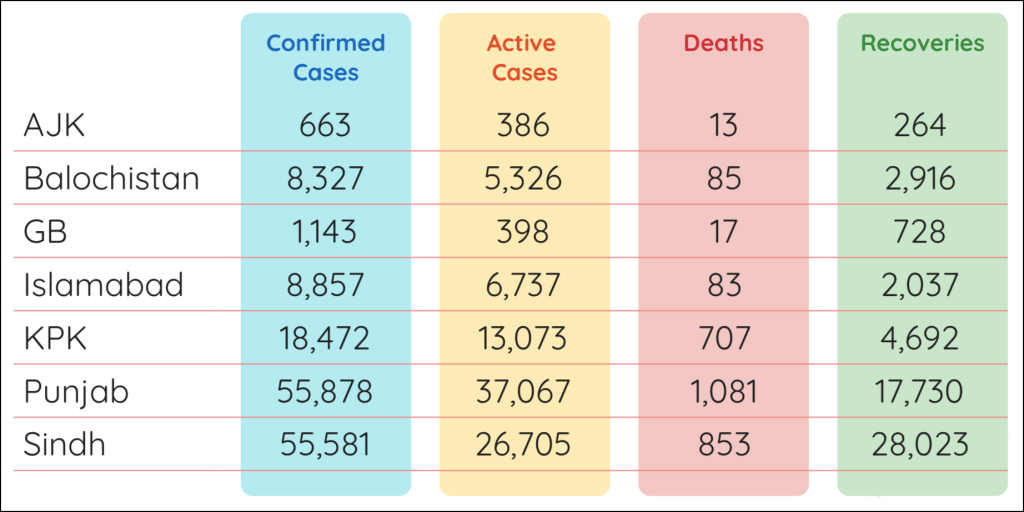 The provincial government on Monday announced it was imposing “selective lockdown” in parts of capital Lahore for two weeks, commencing from midnight tonight (June 16), as the city continues to account for nearly half of all confirmed cases of COVID-19 in the province. Punjab Health Minister Yasmin Rashid warned that the lockdowns could be extended further if the situation did not improve in the coming weeks.

On Tuesday, authorities reported 50 new deaths due to COVID-19, raising total fatalities to 1,081. The province also reported 1,740 new infections, raising confirmed cases to 55,878, against 17,730 recoveries. There are now 37,067 active cases of the virus in Punjab province.

The provincial government has decided to seal virus hotspots for at least 15 days, in accordance with the World Health Organization’s guidelines, with civil administrators saying no one would be allowed to enter or leave these neighborhoods during the extent of the restrictions.

The provincial administration on Monday imposed ‘selective’ lockdowns in four areas of provincial capital Peshawar due to increasing transmission of COVID-19.

Adviser to the C.M. on Information Ajmal Wazir, meanwhile, said operations were also underway against SOP violators, claiming 12,952 raids had been carried out, and 3,878 people issued warnings for violating guidelines.

The province reported 32 new deaths on Tuesday morning, raising its death toll to 707. In the past 24 hours, its recoveries rose by 153 to 4,692, while its confirmed cases have increased to 18,472. There are currently 13,073 active cases of coronavirus in the province. 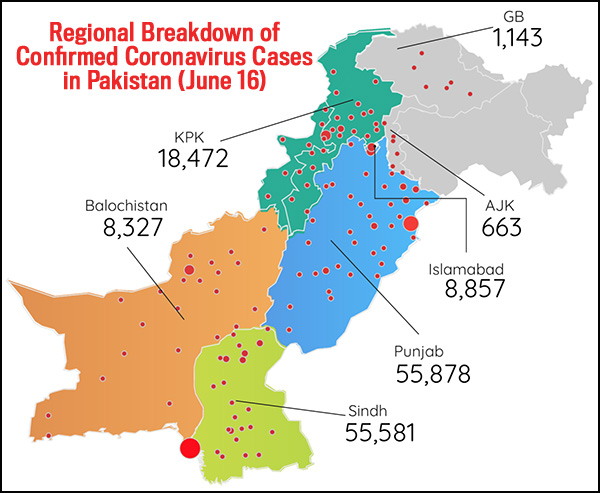 Provincial spokesman Liaquat Shahwani on Monday announced around 120 ventilators were available in hospitals throughout the province, as he warned that its confirmed cases of COVID-19 would likely reach 20,000 by the end of July. He said 2,500 people of the province were currently stranded in Gulf countries, adding efforts were underway to bring them back.

Confirmed cases of the novel coronavirus in the province on Tuesday rose by 60 to 8,237, with no new fatalities leaving total deaths at 85. Overall, 2,916 patients have recovered from the deadly virus, leaving 5,326 active cases of COVID-19.

The federal capital on Tuesday raised its confirmed coronavirus cases to 8,857, with 83 fatalities. Overall there have been 2,037 recoveries, leaving 6,737 active cases of COVID-19.

Confirmed cases of the novel coronavirus in Gilgit-Baltistan rose to 1,143 on Tuesday morning. Overall, the region has thus far reported 17 deaths and 728 recoveries, leaving 398 active cases.

In Pakistan-administered Kashmir, confirmed cases increased to 663. In the past 24 hours, the region’s death toll has reached 13, while 264 people have fully recovered. There are now 386 active cases of the coronavirus in the region.

Globally, the virus has now infected more than 8,118,670 people, with over 439,195 reported deaths. Governments across the world have halted flights, locked down towns and cities and urged people to stay at home, but there are signs of easements in nations that have reined in the virus’ spread to help shuttered economies recover. Overall, around 4,216,315 patients of the 8.1 million+ infected have recovered thus far.