Nine Dead from another Day of Violence in Khyber-Pakhtunkhwa 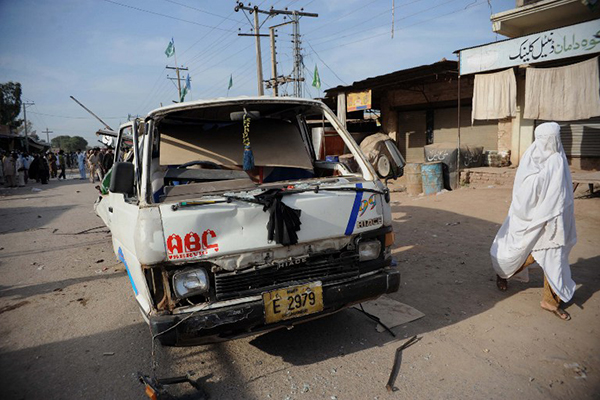 Nine people are dead and 19 injured from yesterday’s bombing of a passenger van in Peshawar’s Matani suburb. The attack followed an explosion at a police station in Badaber and the bombing of a campaign office in Miranshah, North Waziristan.

The dead and wounded from the van attack were taken to Peshawar’s Lady Reading Hospital. “We received nine dead bodies and 19 injured,” hospital spokesman Syed Jameel Shah told Newsweek. Police officials suspect that a time-bomb, packed with three- or four-kilograms of explosives and ball bearings, on the roof of the van went off as the vehicle made its way through a bazaar.

Shopkeeper Subhan Ullah, one of those injured in the attack, told reporters from his hospital bed: “The van was moving at the time of the blast. It stopped for a while in the market and the blast took place some minutes after passengers boarded.”

The attack may have been in retaliation for the Army’s ongoing offensive in the Khyber tribal agency, an operation necessitated by the upcoming elections for the national and provincial legislatures. The Army and law enforcement agencies are conducting sweeps across the northwest, south Punjab, and Karachi to ensure peaceful polling on May 11. Fighting in Khyber has killed 115 militants from the Taliban and Lashkar-e-Islam as well as a score of Pakistani troops. However, the Taliban have said they are not responsible for the Peshawar bombing.

Before that, around 5 a.m., militants blew up the election office of an independent candidate, Kamran Khan, in Miranshah. There were no casualties. A mosque adjacent to the destroyed office has also sustained damage. Khan was elected to the National Assembly in 2008 and lent his support to the Pakistan Peoples Party-led coalition government.

The PPP, Awami National Party (which governed the province until last month), and the Muttahida Qaumi Movement party stand accused of being “secular” and “genocidal” by the Taliban and their cohorts. Militants have warned people against attending their political rallies and have vowed to assassinate their leaders, greatly dampening the electoral prospects of the former ruling parties.