The highest single-day spike in casualties thus far comes as confirmed cases rise to 66,457, with 24,131 recoveries

A day after Special Assistant to the P.M. on Health Dr. Zafar Mirza claimed that the coronavirus situation in Pakistan was “under control,” the country suffered its deadliest 24-hour period for a second day running and reported 78 new deaths on Saturday morning.

There are currently 40,931 active cases of the coronavirus in the country. Worryingly, authorities last week said that 21,085 beds had been set aside for COVID-19 patients in hospitals across the country, nearly half the current cases. While a majority of the infected have mild symptoms and are isolating at home, a sudden spike in patients requiring critical care could overburden Pakistan’s healthcare infrastructure within days, as warned by medical professionals—and summarily dismissed by the government.

Four doctors from across Punjab died due to the coronavirus on Friday, and local media reported all the deceased had contracted the virus while treating patients at hospitals in Lahore, Gujranwala, and Faisalabad.

Despite having the highest number of active cases of the novel coronavirus in the country, the Punjab government continues to propose easing restrictions and reopening sectors of the economy in seeming disregard for any health concerns.

On Saturday, Pakistan’s most populous province recorded 29 deaths, raising its total fatalities to 439. Overall, it now has 24,104 confirmed cases of the novel coronavirus, against 6,507 recoveries. There are 17,158 active cases of the virus in the province.

Reacting to growing calls for an end to all lockdown restrictions—mostly forwarded from businessmen and Pakistan Tehreek-e-Insaf lawmakers—Adviser to the C.M. Murtaza Wahab on Friday urged people to look at the rising death toll and introspect over what further easing of the lockdown might entail. “30 people have died due to COVID-19 in Sindh,” he posted on Twitter. “People asking for everything to open up should look at this number, which has doubled in the last few days before they make any decision,” he added.

The provincial government has announced that public and private educational institutions in the country will not open on June 1, adding that any date for reopening schools would only be announced in light of the prevailing coronavirus situation.

The total number of confirmed COVID-19 cases in the province on Saturday morning rose to 26,113. Additionally, the province raised its casualties by 30 to 427, while its recoveries rose to 12,750. Overall, the province now has 12,936 active cases of the novel coronavirus. 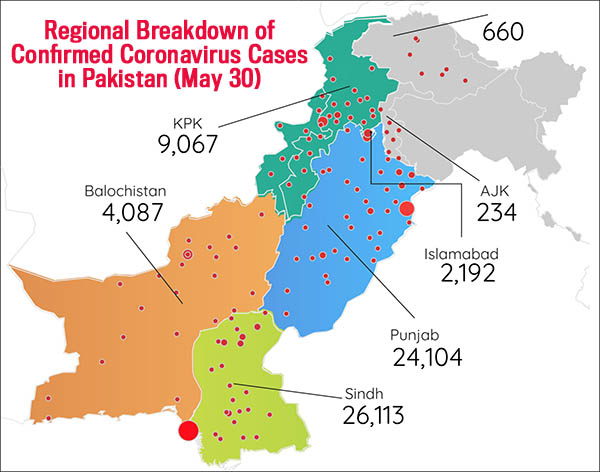 Amid increasing reports that Peshawar’s major hospitals are running out of space and turning patients away, Adviser to the C.M. Ajmal Wazir on Friday said that since international flights had resumed at the Bacha Khan International Airport—at the request of C.M. Mahmood Khan—4,675 passengers had arrived in Peshawar, with 727 of them testing positive for the novel coronavirus.

Echoing Prime Minister Imran Khan, he said the country had no choice but to reopen the economy to prevent people from dying of hunger, rather than coronavirus; the province has the highest death toll due to COVID-19 in Pakistan.

On Saturday, the province reported 13 new deaths, raising its death toll to 445. In the same time period, its recoveries rose to 2,731, while its confirmed cases now stand at 9,067.

There are currently 5,891 active cases of coronavirus in the province.

Provincial spokesman Liaquat Shahwani told a private broadcaster on Friday that the government still believed that lockdowns were the only effective preventative measure against coronavirus in the absence of any vaccine. He said that examining the virus’ spread, the government would once again recommend to the center that movement restrictions should be strengthened, not eased, for the month of June.

However, he admitted, that economic considerations would also have to be taken into account.

Overall, there are currently 4,087 confirmed cases of the novel coronavirus in the restive province, with 46 deaths and 1,400 recoveries. It currently has 2,641 active cases of COVID-19.

Islamabad on Saturday raised its confirmed COVID-19 infections to 2,192, with 23 deaths and 161 recoveries. Presently, the Islamabad Capital Territory has 2,008 active cases of the novel coronavirus.

In Gilgit-Baltistan, cases of the novel coronavirus rose to 660. Overall, it has thus far reported 9 deaths and 477 recoveries, leaving 174 active cases.

In Pakistan-administered Kashmir, the total number of confirmed cases has increased to 234. The region has also reported 6 deaths and 105 recoveries, leaving 123 active cases of the virus.

Globally, the virus has now infected more than 6,033,810 people, with over 366,890 reported deaths. Governments across the world have halted flights, locked down towns and cities and urged people to stay at home, but there are signs of easements to help shuttered economies recover. Overall, around 2,661,145 patients of the 6 million+ infected have recovered thus far.