by AFP and Newsweek Pakistan September 28, 2013 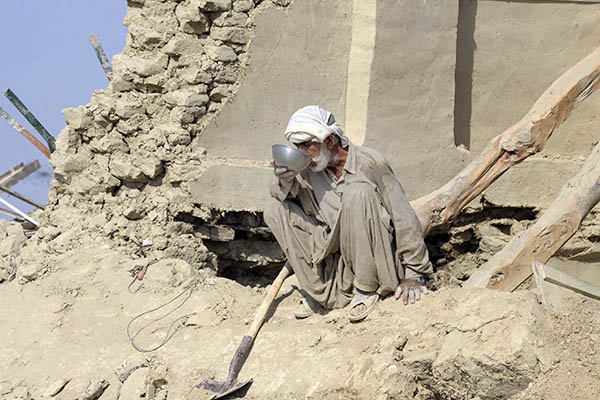 Latest tremor struck 96 kilometers northeast of Awaran district at a depth of 14 kilometers.

A 6.8-magnitude earthquake hit southwest Pakistan Saturday in a region already devastated by a quake which left more than 300 dead just days ago.

The new tremor struck 96 kilometers northeast of the district of Awaran at a depth of 14km, according to the U.S. Geological Survey.

“It was not an aftershock it was an independent earthquake,” Zahid Rafi, director of the National Seismic Centre of Pakistan, told Geo TV.

A large number of houses in the Nokju area of Awaran district’s Mashkay subdivision have collapsed due to the tremors caused by the latest earthquake, a senior government official told Newsweek. Zahir Jan Jamaldani said: “Nokju village has been badly damaged in the new earthquake that originated 156km southwest of Khuzdar.” He said there were reports of casualties but it was too soon to comment. “We are trying to get more information,” he added.

Rashid Baloch, Awaran district deputy commissioner, told Newsweek that four bodies had been recovered from Nokju after the latest tremor. “Almost all the houses in the village have collapsed,” he said, adding that relief and rescue teams had been dispatched.

Nokju has a population of 15-20,000 people and there is concern that the number of casualties will increase.