Another Suicide Attack in Kabul 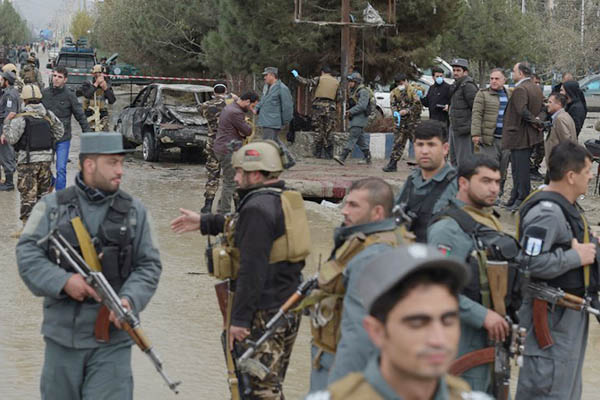 A suicide attacker blew himself up outside a political gathering in Kabul killing at least 14 people, officials said on Thursday, highlighting the deepening divisions in the war-torn country.

The deadly attack, claimed by the Islamic State group in a brief message via its Amaq propaganda agency, was the latest to hit the Afghan capital, where insurgents have been stepping up assaults in a devastating show of force. Supporters of Atta Mohammad Noor, the powerful governor of the northern province of Balkh and a vocal critic of Afghan President Ashraf Ghani, had been holding an event inside a wedding hall at the time of the blast.

Noor was not at the gathering, one of his aides told AFP. Ghani issued a statement condemning the attack as a “criminal act.”

The bomber tried to enter the building but was stopped at the security checkpoint where he detonated his device, Kabul police spokesman Abdul Basir Mujahid told AFP. “A number of our police personnel are among the casualties,” Mujahid said. “As a result of today’s suicide attack eight police and six civilians have been killed while a further 18 have been wounded.”

Interior ministry spokesman Najib Danish had earlier put the death toll at nine, including seven policemen and two civilians. “The bomber detonated himself after he was identified by the police at the entrance gate,” Danish said. “After lunch as we were exiting the hall a huge explosion shook the hall, shattering glass and causing chaos and panic,” said Harun Mutaref, who was at the gathering. “I saw many bodies including police and civilians lying in blood.”

Mohammad Farhad Azimi, a member of parliament and supporter of Noor, said he saw “many casualties.” He added: “Some of my bodyguards have been injured.”

An AFP photographer said the windows of the wedding hall had been shattered by the force of the blast and a vehicle parked outside was on fire. Dozens of police and intelligence officers have swarmed the area and blocked access to the public.

Photos posted on Twitter purportedly from the attack showed multiple bodies of men lying on top of each other in a muddy street and in a drain, and people dragging away the wounded.

Noor, a senior leader of the Tajik-dominated Jamiat-e-Islami party, has been an outspoken critic of Ghani and the National Unity Government. In a statement posted on Facebook, Noor blamed an “evil circle” inside the government for the attack. “Our fight against terrorists and terrorism and for justice will continue and such actions, the perpetrators of which are known, will not deter us,” he said.

It is not the first time that top officials in the Jamiat political group have been targeted by attackers. Foreign Minister Salahuddin Rabbani, who heads Jamiat, survived an attack at a funeral in Kabul in June where suicide bombers tore through a row of mourners. Chief Executive Abdullah Abdullah also escaped unharmed.

Political and ethnic rivalries have been intensifying ahead of next year’s long-delayed district and parliamentary elections, which would pave the way for the 2019 presidential ballot. Noor has previously hinted that he may run for the country’s highest office.

On Wednesday, Ghani—who is a Pashtun, the largest ethnic group in Afghanistan—sacked the Independent Election Commission chief Najibullah Ahmadzai after technical and political bungling, fueling speculation the vote will not go ahead. That came after the recent firing of Education Minister Asadullah Hanafi Balkhi, who was considered a close ally of Noor, and one of Ghani’s advisers Ahmadullah Alizai.

Noor has recently called for the return of Vice President Abdul Rashid Dostum, a powerful ethnic Uzbek warlord who fled to Turkey in May after he was accused of raping and torturing a political rival in 2016. Earlier this year Noor met with Deputy Chief Executive Mohammad Mohaqiq, a senior figure in the mainly Shia Hazara ethnic community, and Dostum in Turkey to form the “Coalition for the Salvation of Afghanistan.”