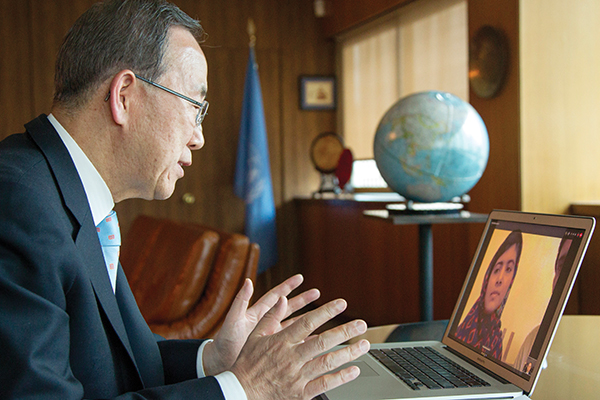 The story of the next Malalas.

[dropcap]W[/dropcap]e don’t let our women leave the house,” says the man on the screen, his face burned dark by the sun, his eyes sure of what he’s talking about. There is no hint of shame as he refuses even to think about letting women work in the local market. “If a girl goes to school, she becomes independent. Our response to such behavior is a bullet.”

Khalida Brohi, a young woman barely in her 20s, looks at this elder in Pakistan’s rugged, troubled territories—the same sort of village she comes from—and says, only half as a question, “The answer to all your questions is a bullet?”

“When it comes to our honor, the only answer is a bullet,” he says.

The elder and other men around him laugh mirthlessly. “You may be right,” he says, “but if it happens with our women, the answer is always a bullet.”

That dialogue and that phrase—“a bullet”—crystallized the issues around which the Women in the World Summit became a powerful call to action. It was a game-changing moment when what is really at stake became abundantly clear.

The summit, organized by Newsweek and The Daily Beast, took place recently in New York, with women from Africa and Latin America, from Asia and the United States, and indeed from around the world, making the point—again and again—that the global struggle for women is not just to “lean in” as individuals, but to “lean on” society and government to open up greater space for all women to advance and thrive.

Among the extraordinary testimonies was that of Malala Yousafzai, the teenager who is still recovering in Britain after an assassination attempt by the Taliban and sent a video message to the audience at Lincoln Center. Yousafzai took a bullet to the head and, miraculously, survived to keep fighting for greater education in Brohi’s region.

Hillary Clinton, speaking at the summit, in what was her first major policy address since she stepped down as the U.S. secretary of State, lauded Malala’s bravery for claiming the rights to play, to dance, to be educated, to grow—the most basic conceivable rights. “The Taliban recognized this young girl, 14 at the time, as a serious threat,” said Clinton. “And you know what, they were right. She was a threat.”

Or, as Angelina Jolie, who also attended the summit, memorably put it: “They shot her point-blank range in the head—and made her stronger.” Jolie not only paid tribute to Malala onstage—she pledged $200,000 to the foundation that Malala herself will run.

The film of the men talking about their bullets for their women was shown during “The Next Malalas” panel with CNN’s Christiane Amanpour interviewing Brohi; another young woman activist from Pakistan, Humaira Bachal; and documentary filmmaker Sharmeen Obaid Chinoy.

Their testimony about their life and work in Pakistan was as thoughtful and practical as it was inspiring.

“There is absolutely nothing honorable about restricting women’s education,” said Bachal, whose Dream Foundation has so far helped to educate 2,000 women. “Actually this is a power game,” she said. “Men just want to treat women like an animal in our society, and they feel if the women are educated, they demand their rights. So this is basically power.”

‘They shot her point-blank range in the head—and made her stronger,’ Angelina Jolie said of Malala.

In Bachal’s own case, her mother had to chop wood to pay for her school fees, and when their community discovered this, her family was told they had to leave. But Bachal persisted and built her school, right in the middle of a gang-infested neighborhood with a great deal of violence. She tells the thugs around her they can do what they want to each other, but nothing happens to her kids. And so it is. “She doesn’t talk any nonsense,” says Obaid Chinoy.

These women understand that the way to help other women most effectively is not to fight the waves of prejudice, as if they were trying to beat back the tide, but to work with the men—educating them, persuading them persistently and, indeed, relentlessly.

Brohi, who was 17 and lost a friend from her village to an “honor killing,” said that, at first, she thought a campaign reflecting her fury would bring change, but eventually realized that it wouldn’t work. Now 24, and the head of an organization called Sughar, which creates employment for women in the tribal areas, she says she works to bring into her cause the power of these men who talk about “a bullet” and then use that power to help effect change. When Amanpour marveled at her patience with the elder talking about “a bullet” in the film clip, Brohi had a ready answer. “I think I was being patient over there,” she said, “because I knew that this man would one day be working for me.”

All three of the Pakistani women on stage at the summit wanted to be sure the audience understood that there are many, many more like Malala and themselves in their country. When Malala was shot, said Bachal, “we realized this was the face of our society.” But she added: “In Pakistan, every day a new Malala” is born.

“This is the narrative of Pakistan that never gets out,” said Obaid Chinoy. “We cannot allow fear to take over our lives. If we choose to stay there, we must fight every single day.”

The struggle begins at home for these women. Brohi said her family was very supportive at first, but as Sughar grew into a full-fledged operation that sells fashion accessories made by tribal women and works to liberate more of them around the country, Brohi faced a backlash that included the bombing of one of the Sughar offices when she was in it. Her father began to worry that the whole project was out of hand, and, of course, he began to worry about her life. By the time she told him she was going to go to New York for the summit, he was against it.

So did every person who heard her in New York.