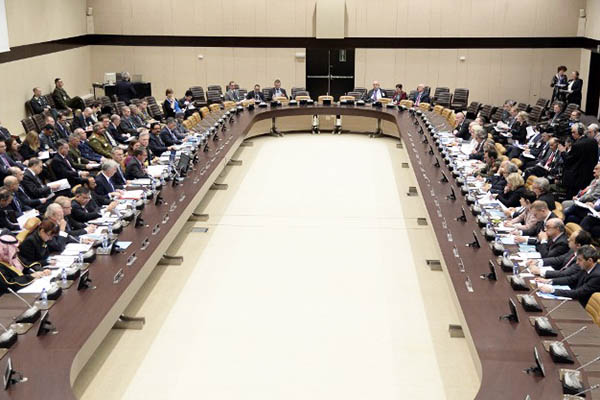 Defense ministers from the U.S.-led coalition striking the Islamic State group in Iraq and Syria vowed Thursday to redouble their efforts to defeat the jihadists and accelerate the difficult campaign.

Their pledges came during a special summit convened in Brussels by Pentagon chief Ashton Carter, who for months has been lobbying partner nations to bring more to the 18-month operation. Discussions were “very successful and productive,” Carter said, noting that the vast majority of the 27 nations he met with had either committed more assets or promised to ask their parliaments to do so.

The contributions include a Saudi promise to renew its long-neglected air operations in Syria, a pledge from the Netherlands to carry out airstrikes in Syria, and Canada’s recent announcement it would send additional trainers to work with local forces. The campaign is primarily centered on airstrikes, but coalition commandos are also working with local forces in Iraq and anti-I.S. fighters in Syria to tackle the jihadists. “The coalition is clearly intensifying the counter-ISIL campaign,” Carter said. “Saudi Arabia and its regional partners have a clear stake in this fight, and I hope its neighbors in the Gulf also intensify their counter-ISIL campaign in the coming days,” he added.

Additionally, he said NATO was “exploring the possibility” it would join the coalition. Though the anti-I.S. operation already comprises all the NATO member states, it is not yet in the alliance in its own right. As a result of the stepped-up efforts, the coalition should see “tangible gains” in the coming weeks, Carter said without elaborating.

The coalition, which comprises 66 nations, has since August 2014 been carrying out airstrikes in Iraq and Syria to push back I.S. jihadists after they swept across vast parts of the two countries. Officials say the campaign is making the most progress in Iraq, where local security forces have retaken the city of Ramadi and clawed back some 40 percent of territory previously held by I.S.

But the situation in Syria remains more challenging, thanks to its raging civil war and the ongoing Russian air bombardment of forces opposing President Bashar al-Assad. Moscow insists is also targeting the I.S. group.

“The fight to defeat ISIL should matter to all of us, and each contribution matters to this fight,” Carter said. “ISIL’s activities are an affront to our common human dignity and to the common set of values that brings this diverse coalition of nations together.”

During the closed-door meeting, Lieutenant General Sean MacFarland, who is overseeing the anti-I.S. effort, gave an overview of the situation on the ground. A senior U.S. defense official who was present said MacFarland described how the I.S. group has “lost the initiative” in the fight, thanks to more than 10,000 coalition airstrikes and a series of attacks on the jihadists’ oil and financial infrastructure. But large-scale progress remains elusive, and Carter and President Barack Obama face growing criticism at home over the campaign’s pace.

Assaults to recapture the key I.S. bastions of Mosul in Iraq and its self-proclaimed capital in Syria’s Raqa are still many months away, while at the same time thousands of I.S. fighters have streamed into Libya.

Carter said defense ministers had discussed the situation in Libya, where former colonial power Italy is being positioned to take the lead in any eventual operations. “Nobody wants to see Libya on a glide slope to the kind of situation that already engulfed Syria and Iraq,” he said.

Carter’s summit came at the conclusion of a two-day meeting of NATO defense ministers that dealt with a range of separate issues.

NATO has until now had no official role in the anti-I.S. fight, although all of its 28 members play some part, and officials indicated the alliance could be increasingly called upon to help. “There are lots of opportunities that are being considered,” NATO’s Supreme Allied Commander Europe Philip Breedlove said.

Breedlove’s comments came after NATO said it was willing to support a German, Greek and Turkish request for help in monitoring Turkey’s Aegean Sea coast for migrant smugglers ferrying refugees, mostly fleeing the Syrian conflict. And the alliance has agreed “in principle” to a U.S. request to deploy its AWACS air surveillance aircraft to help out in the fight against I.S.

The NATO planes would not be directly involved in monitoring the jihadists, but would instead fill in for U.S. and allied aircraft that would be re-tasked to gather intelligence over I.S. hotspots.