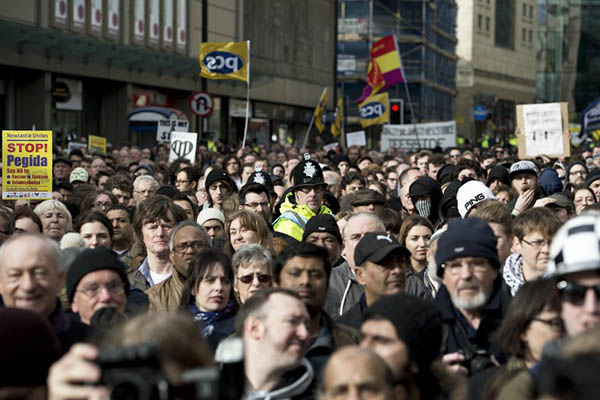 Germany-based movement claims it is not against Muslims, merely lack of integration.

An estimated 375 people turned out for the Germany-based PEGIDA movement’s first demonstration in Britain on Saturday, but were outnumbered by a 2,000-strong crowd of counter-protesters, police said.

PEGIDA has drawn large crowds in Germany to protest against what it calls the “Islamization” of Europe, and small demonstrations have also taken place in Austria and Sweden. Police in the city of Newcastle, northeast England, said five men were arrested “for isolated incidents” but insisted both the PEGIDA march and the Newcastle Unites protest passed off smoothly.

The five men, aged between 17 and 54, were arrested for alleged offences including assault, breach of the peace and for being drunk and disorderly.

Extra police had been deployed in the city, which was also hosting a Premier League football match between Newcastle United and Aston Villa, and there were some angry confrontations as officers kept the two protests apart.

One steward said there was a brief scuffle involving members of far-right groups, which temporarily damaged PEGIDA’s PA system. Some people attending also held up flags of the xenophobic National Front group. However, police Chief Superintendent Laura Young said: “Both demonstrations passed without any problems.”

PEGIDA’s spokeswoman in Britain, Marion Rogers, earlier insisted that the group was not racist or against Muslims. “It’s about integration. We are not anti-Islam. We are not here to split up any communities,” she told the BBC. “We’ve invited Muslims to join us against extremism, extremism of any kind. I don’t think it’s wrong to stand up to terrorism. Is that hate?”

PEGIDA, which stands for Patriotic Europeans Against the Islamization of the West, drew up to 25,000 people in German street rallies last month.

Among those attending the counter-rally in Newcastle was left-wing firebrand lawmaker George Galloway. “It is absolutely extraordinary that a German organization sets up in the U.K.—it’s not as if there is a lack of rightwing nutter organizations here,” he said. “They have got to be opposed, wherever they are.”

The English Defense League, a homegrown British group that protested against the perceived threat from Islamic extremism, held a number of protests throughout 2013, which often ended in clashes with anti-fascist demonstrators. But the group has lost momentum since its leader Tommy Robinson quit in October that year, saying he could no longer keep “extremist elements” in the group at bay.