Home Scope Anti-Muslim Sentiment on the Rise in Europe, Asia

Anti-Muslim Sentiment on the Rise in Europe, Asia 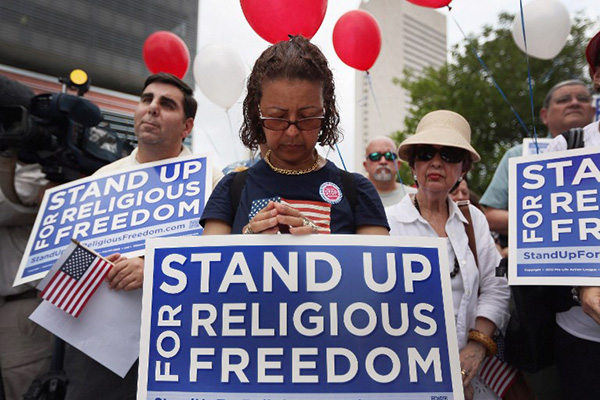 The United States on Monday denounced what it called a rising tide of both anti-Muslim and anti-Jewish sentiment around the world as it urged all nations to ensure freedom of religion.

In a wide-ranging annual report on religious freedom, the State Department voiced alarm at growing attacks against minority groups and painted a bleak picture in nations such as China, Iran, Myanmar, North Korea, and Saudi Arabia.

Secretary of State John Kerry, while acknowledging that the U.S. record was not perfect, called religious freedom a “universal value” as he presented the report. “The freedom to profess and practice one’s faith—to believe or not to believe, or to change one’s beliefs—that is a birthright of every human being,” Kerry said. “I urge all countries, especially those identified in this report, to take action now to safeguard this fundamental freedom.”

The report said anti-Semitism was rising in the media of Egypt and Venezuela, where failed presidential candidate Henrique Capriles has Jewish ancestry, and pointed to Iranian President Mahmoud Ahmadinejad’s remarks questioning the extent of the Holocaust.

The State Department report, which covered 2012, states that “anti-Muslim rhetoric and actions were clearly on the rise—particularly in Europe and Asia.”

The report sharply criticized the record of Myanmar on the same day that President Thein Sein met with Obama in a sign of U.S. support for the former general’s democratic reforms. “On Burma, we didn’t see any improvement in religious freedom,” said Suzan Johnson Cook, the ambassador-at-large for international religious freedom, using Myanmar’s former name.

The State Department report pointed to allegations that officials in Myanmar fanned a wave of violence targeting the mostly Muslim Rohingya community and said that Myanmar promoted Theravada Buddhism over other faiths.

The survey said that religious freedom declined further in China and that authorities cracked down particularly hard on the mostly Muslim Uighur community and on Tibetan Buddhists, whose monasteries are under close watch.

The report said that Muslims also faced new restrictions in 2012 in countries ranging from Belgium, which banned face-covering religious attire in classrooms, to India where schools in Mangalore restricted headscarves.

The report also voiced alarm at soaring violence against Islamic minorities including Shias and Ahmadis in Pakistan, where laws restrict the Ahmadi community from even calling itself Muslim. The study also voiced concern for Ahmadis in Indonesia and Bahais in Iran. It said blasphemy laws were widely abused in Islamic countries including Pakistan, where incidents last year included the detention of a mentally challenged girl.

The State Department did not spare Bahrain from criticism, saying that the island’s Shia majority “continued to face official discrimination” and allegations of torture.

Human rights groups have criticized Obama for his support of Bahrain, a tiny kingdom that is home to the U.S. Fifth Fleet, despite its crackdown on Shia-led protests inspired by other Arab Spring uprisings. The report also noted sweeping restrictions on religious freedom in longtime U.S. ally Saudi Arabia.

“They don’t allow any non-Islamic persons to have religious freedom, so I don’t see progress there,” Cook told reporters.