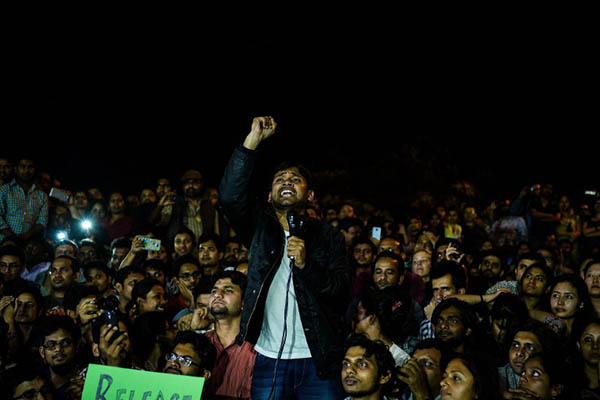 An Indian student leader walked out of prison on Thursday, nearly three weeks after he was arrested on a controversial sedition charge that sparked major protests and a nationwide debate over free speech.

Kanhaiya Kumar was arrested on Feb. 12 over a rally at Delhi’s prestigious Jawaharlal Nehru University (JNU) at which anti-India slogans were chanted. He had been in custody in the capital’s Tihar jail since Feb. 17.

Kumar received a hero’s welcome on his return to JNU, where he addressed a gathering of hundreds of students and faculty members late Thursday. “The struggle is long. The more you try to suppress us, the higher we will rise,” Kumar said as the crowds erupted in cheers. “We are not asking for freedom from India, but asking for freedom in India.”

On Wednesday, the Delhi High Court granted Kumar six months’ interim bail while the police investigate the case, directing him not to participate in “anti-national” activities.

The student union leader denies he was among those chanting the slogans at the rally, held to mark the 2013 hanging of Kashmiri separatist Mohammed Afzal Guru over a deadly attack on the Indian parliament. Two other students, Umar Khalid and Anirban Bhattacharya, are accused of being among the organizers of the JNU event and have been arrested on the same sedition charge as Kumar.

The Delhi High Court’s order listed some of the slogans shouted at the Feb. 9 event, including “Our war will continue until India is destroyed” and “Death to the Indian army.”

“They are enjoying this freedom [of speech] only because our borders are guarded by our armed and paramilitary forces,” Judge Pratibha Rani said. “I consider this as a kind of infection from which such students are suffering, which needs to be controlled/cured before it becomes an epidemic.”

A Delhi government report published Thursday said while no witness or video evidence could be found implicating Kumar, the role of other students at the rally “must be investigated further.”

Kumar’s arrest sparked a major row over freedom of expression in India, bringing thousands of students, teachers and activists onto the streets. Some rights campaigners say the Hindu nationalist government is using a British-era sedition law to clamp down on dissent. Sedition carries a maximum penalty of life imprisonment, although convictions are rare.