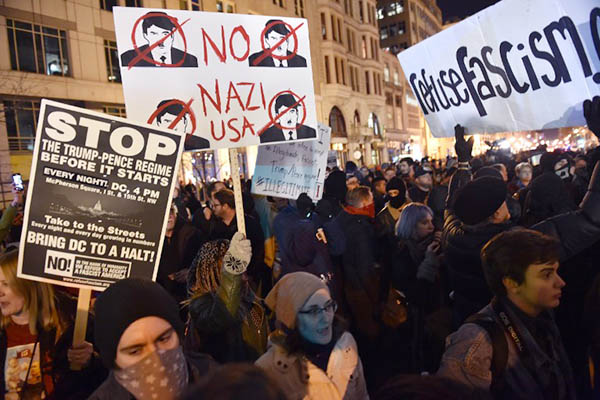 Hundreds of protesters demonstrating against Donald Trump clashed with guests leaving an event in honor of the new U.S. president in Washington on Thursday, prompting police to use chemical spray on the crowd.

The protesters, who heckled guests and shouted foul language at people leaving the “Deploraball,” also burned protest signs, creating a smoke-filled scene in front of the National Press Building, where the event was held.

Dozens of police, many in riot gear, were on scene, with some trying to help ball-goers, dressed in tuxedos and evening dresses, leave the area as demonstrators chased them down the street.

Although largely peaceful at first, the protest grew more ragged as the night drew on. Several prominent members of the so-called “alt-right” movement reportedly organized or were to attend the event, held on the eve of Trump’s inauguration.

The name of the event is a play on Hillary Clinton’s campaign statement criticizing half of Trump’s supporters as a “basket of deplorables.”